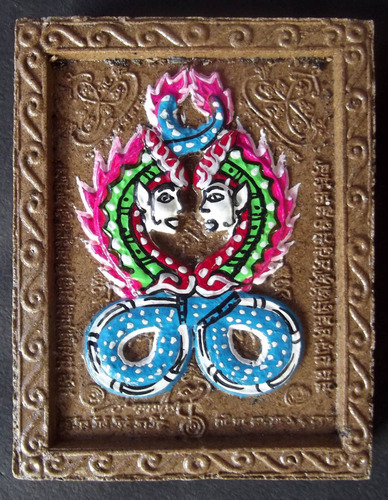 For Increased Business, Improved Social and Love life and Oratory skills, Protection against Dangers and Mishaps. 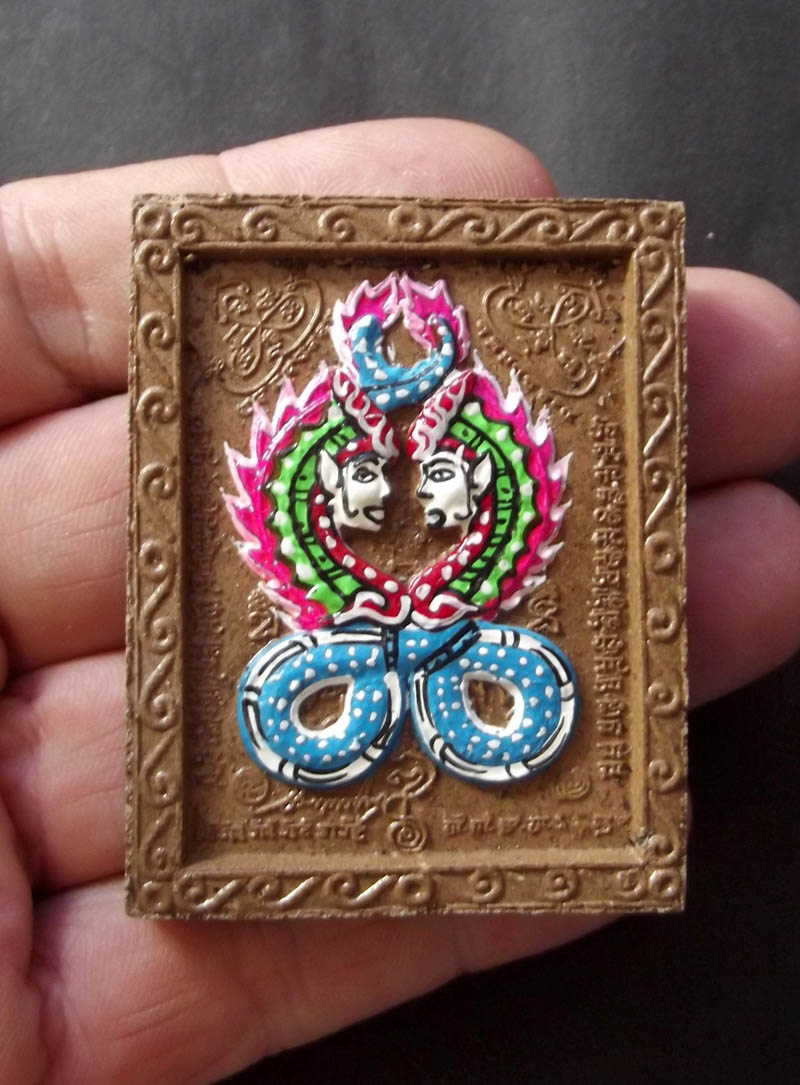 Made from Pong Puttakun (Magic Powders made from Chalk Yantra Inscription) mixed with the Finest Grade Pong Mai Mongkol 108 (108 types of Rare Magical Herbal Powdered Woods and Pollens). the amulet has fragments of sacred magical substances sprinkled into the Muan Sarn of the rear face of the amulet. The finely hand painted designs on each amulet are beautifully and lovingly applied with individual attention. The front face features the Taep Nak Giaw (Naga Pair Entwined), in a Posture very Reminiscent and Representative of the Pitsamorn Deva (Butterfly King). The amulet has the riches mixture of Sacred Powders of the whole edition, and is the Masterpiece (Ongk Kroo) of this Line of Wai Kroo Amulets of 2555 BE.

A Large amulet with Aromatic Emission, which is hand painted with Colorful Embelishments. Each and every Amulet has slightly different individual color markings, making each Amulet a Unique piece of Miniature Buddhist Sacred Arts. 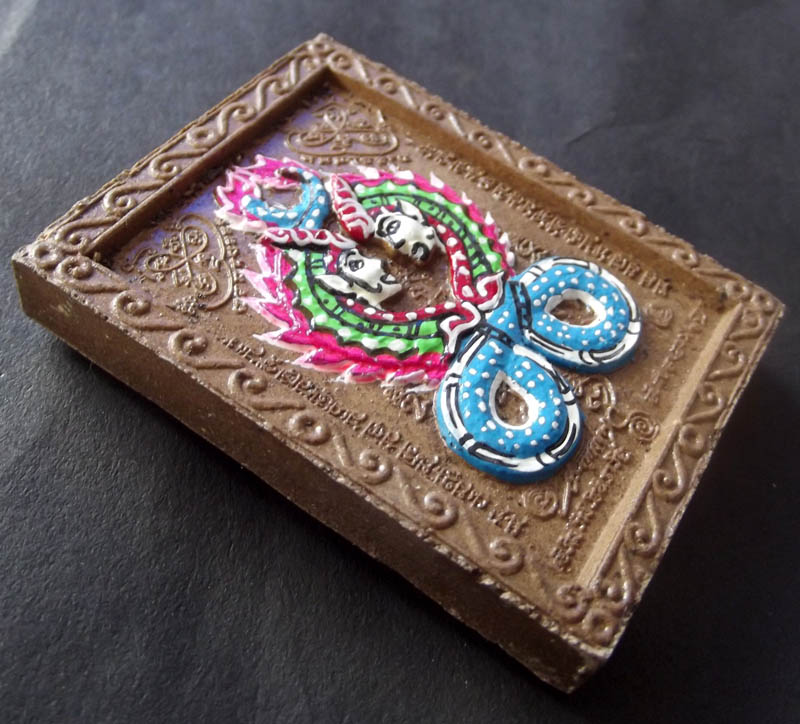 The Entwined Naga Devas offer a very Powerful Metta Mahaniyom Effect (Induce Compassion and Preference and, Helpfulness and in the hearts of those who approach), along with Klaew Klaad (Evasion of Danger and Mishaps), Maha Amnaj (Power and Convincing Effect) and Pokasap (Wealth and Treasures) Magic. The Nak Giaw is thus a More Proactive Metta Mahaniyom type Thai Amulet than the Passively Effective Nok Sariga Amulets issued in the same 2552 Wai Kroo Edition. 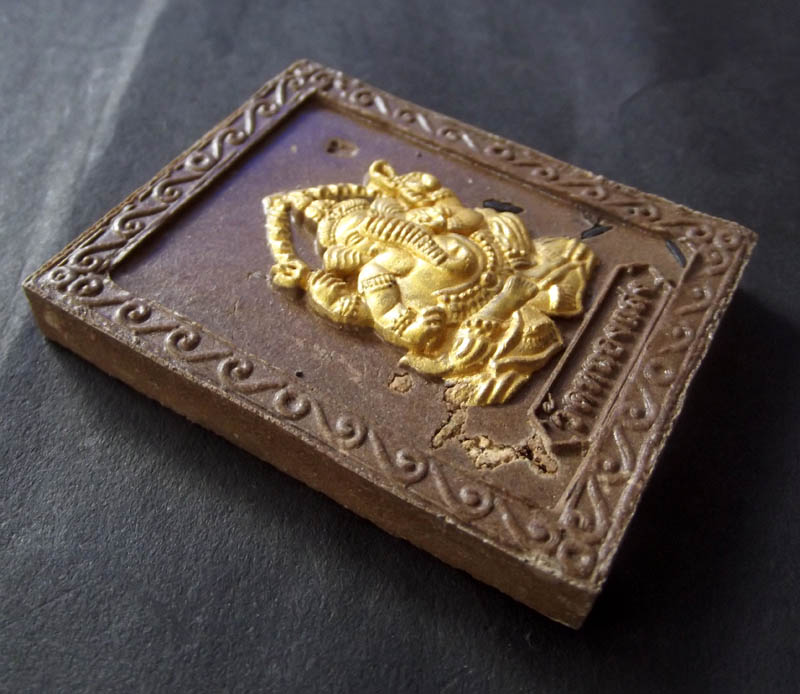 The rear face features Pra Pikanes (Ganesha). This amulet is Doubly Attractive because you get two different Devas in one Amulet which are both Powerful to Improve Business, Selling Quotas, increase Customers and Profits, Remove Obstacles and Initiate Success. The area surrounding the Devas is filled with Sanskrit Inscriptions of Vedic Spells. 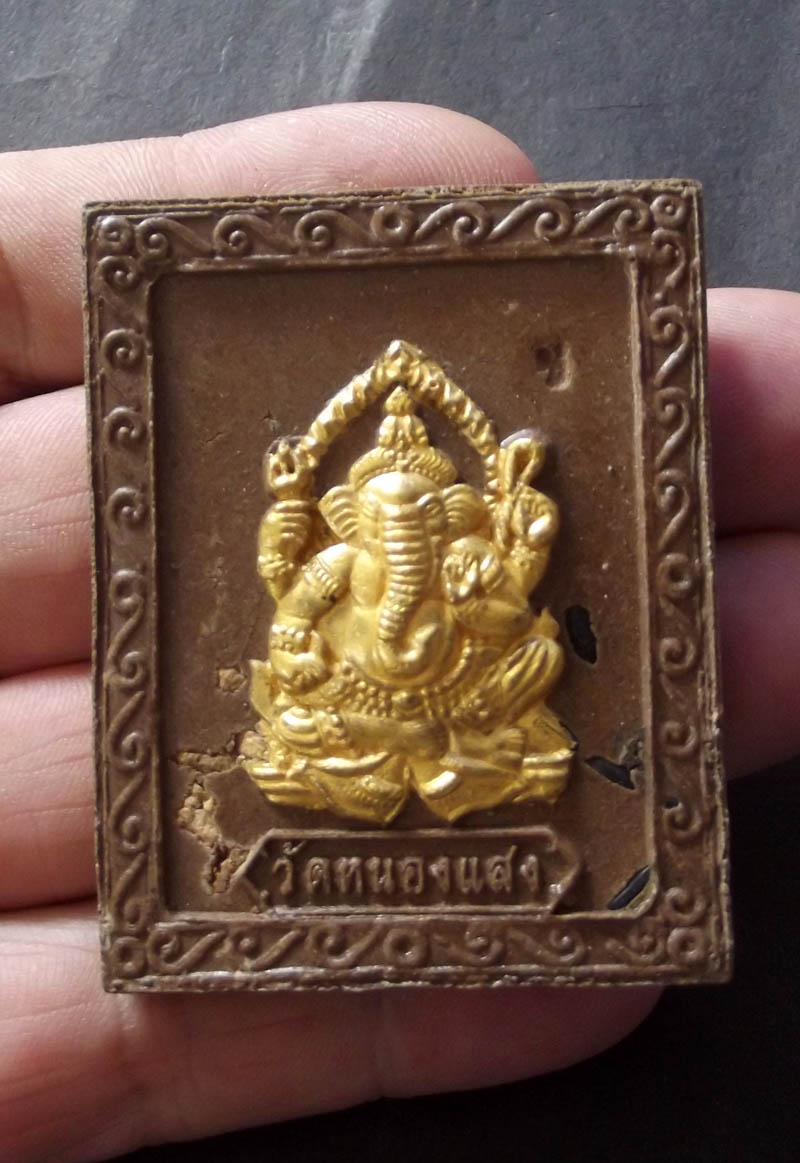 Some fragments of Sacred Muan Sarn  are sprinkled into the rear face of the amulet. This Ongk Kroo Version has a much higher concentration of Rare and Valuable Sacred Powders than the Standard Version Amulets of the edition. Ganesha or, as we say in Thai 'Pra Pikanes' is the Deity for removal of obstacles and attainment of success. Pra Pikanes has many different forms, with different meanings. he may have four, six, eight, twelve or even fourteen arms, but almost never two arms, this being a Tabu. Pra Pikanes may carry any of a number of 57 different Cosmic weapons or regalia in his hands. 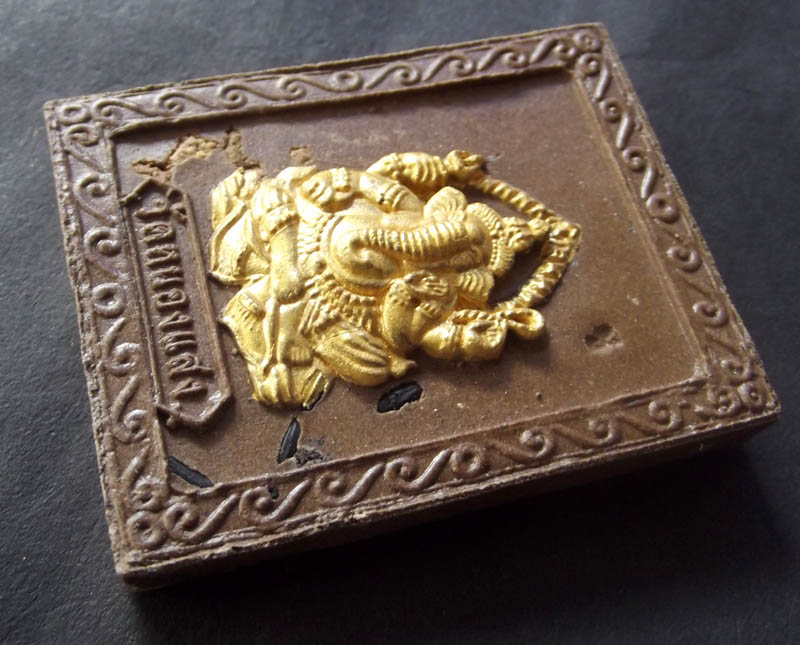 This particular Posture is four armed with whip, axe and consumibles. This Posture and combinations induces not only the removal of obstacles and success, but also wealth and plentiful treasures and posessions and well being. The amulet is made from Sacred Powders, and hand painted and covered with a fine ceramic glaze. The rear face has sanskrit Agkhara and Sacred Na Inscription. The hand waving an axe, is a symbol of the retrenchment of all desires, bearers of pain and suffering. With this axe Ganesha can both strike and repel obstacles. 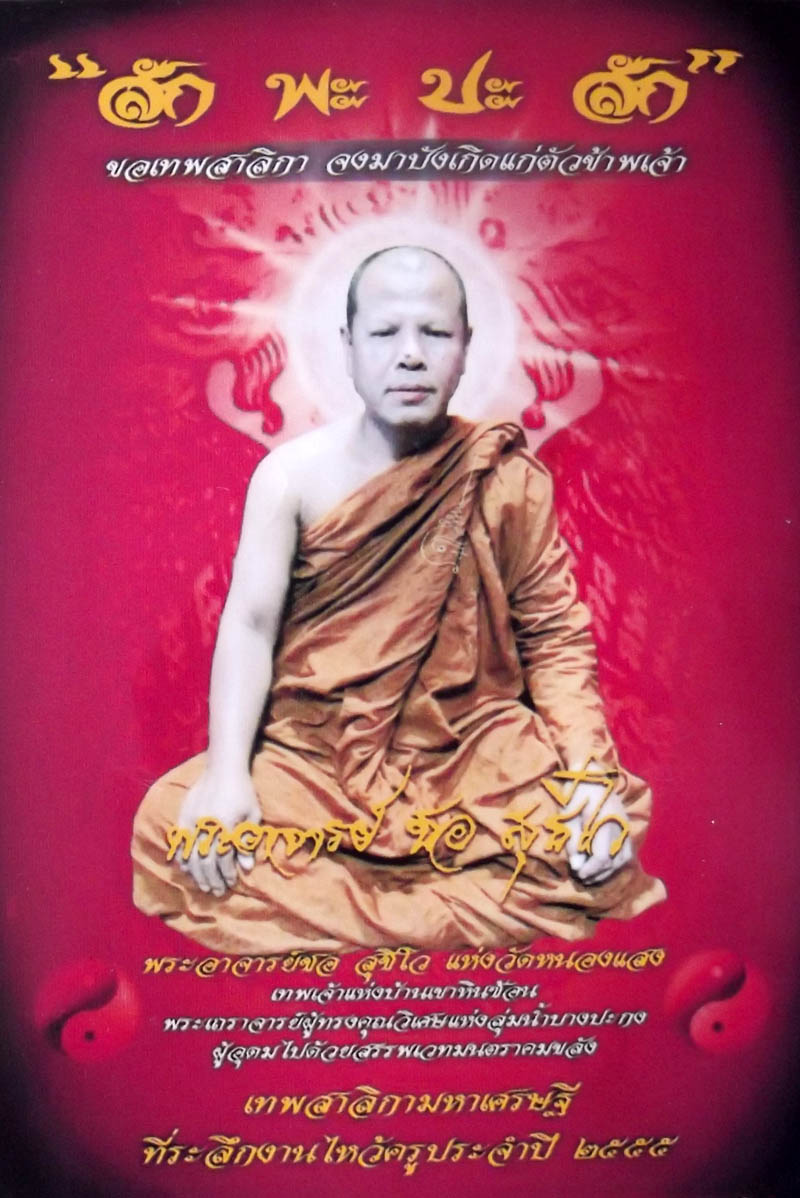 In each hand, he holds a Ritual Instrument or Weapon.

Sometimes he also holds a whip to restrain the desires with. All of the features of Pra Pikanes image are symbols for the various Qualities of the Deity; 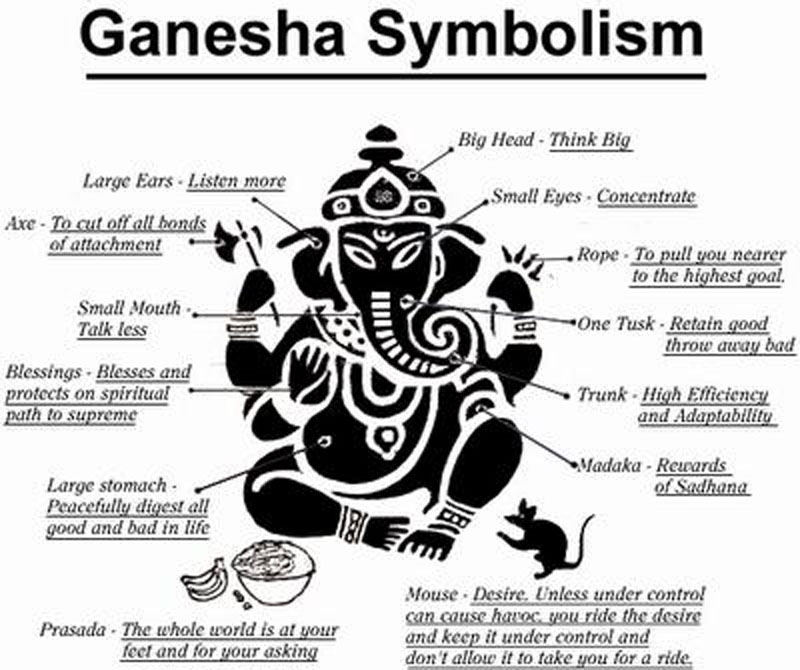 Use when putting the amulet on and off each day, and as a short Kata when passing Holy Places with Images of Ganesha, or when during Daily Activities.

"Once there was neither Being nor Nonbeing. There was neither Form nor Formlessness. Then, That which was hidden within Itself, That One, stirring, emerging, coming to be. From Itself to the Formless to the Form. Immutable, changeless, everywhere, pervading all, yet not physically such is the mystery. Suddenly an ancient note piercing the darkness. A song whose birth stirred the slumbering, summoning an eternal mystery to awaken.

Emerging from deep within the hidden cave, the human heart, Ganesha’s truth flows from the icecave of the infinite. Housed within our gated dwelling, Ganesha the guest loved and longed for. That which has no form, can take a form. That which has no name, can take a name. From the formless to form, and back again and again and again. The wheel of time gathers speed, and somewhere between fact and legend, vision and myth, we ask, “Who is Ganesha?” There are those who lovingly sing his praises.

Note from Ajarn Spencer Littlewood; "A comprehensive knowledge about the meaning and the meritorious abilities of Ganesha (or other Deities for that Matter), will lead to the wearer of the amulet bearing such qualities of character in mind, and eventually to develop such Meritotious Qualities in oneself. - Some people revere Devas simply for gaining assistance or help, and blessings, but others revere the Devas, for they admire the qualities they see within those Devas, of strength and perfection and raised high above worldly sufferings. To know that the mouse represents the mastery over ones instincts and desires, is to remember to try to not let desire take yourself for a ride.. study the qualities of your Devas, and contemplate how to develop those strengths yourself, this is a higher blessing than any wealth or worldly treasure - this kind of Devotee who imitates his positive heavenly Idols, will work towards becoming like those Devas which he idolizes and reveres, which is the true purpose of Deity Worship in the Long Run, and even Moksha can be achieved as a Goal through Devotion to Gurus or Deities, which is an act of Self Renunciation, and can lead to Liberation.