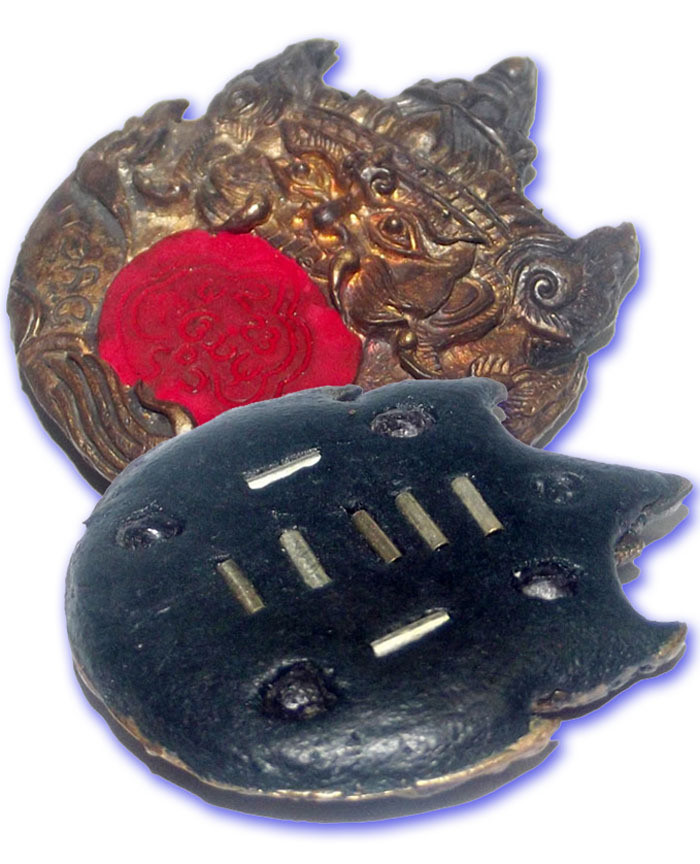 Rahu Jab Dtawan Jab Jantr Yok Duang (Eclipse God Grabbing the Sun and the Moon and Lifting The Line of Fate) - 'Pra Rahu'  is the Deity of Fate and Fortune, the Astrological Ruler of the Dark Phases of the Zodiac. Whoever tries to Kill Rahu is Thwarted, he just remains Alive, being an 'Immortal'* God. 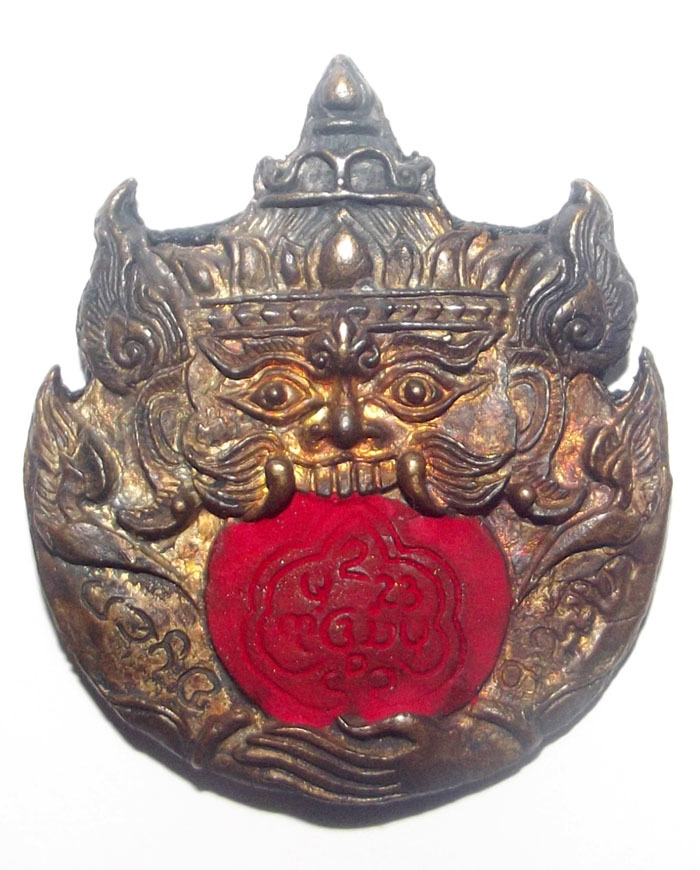 The high quality Bronze with rich silver and gold content is visibly generous in its mixture, and the Artisanry and design of the Asura Deva is both Pristine, and Inimitable. The central Yantra Inscription is red Colored, distinguishing its both front and rear faces from the standard version. The slim build of the amulet will allow for a nice flat fit against the skin when encased in waterproof casing (recommended) 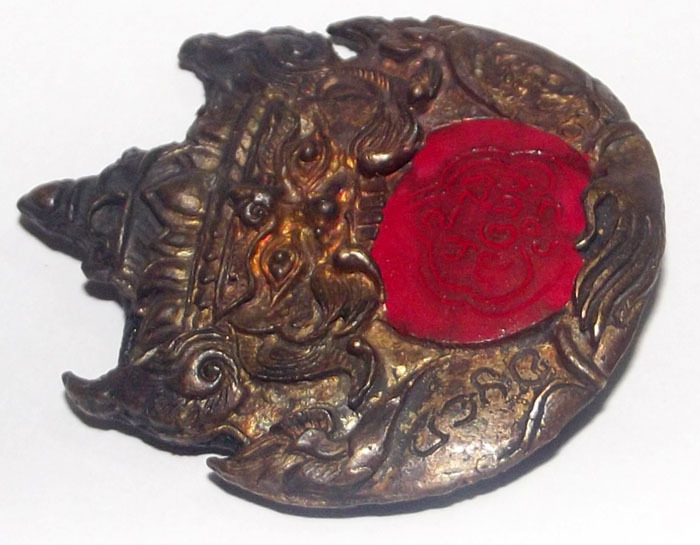 Kroo Ba Lerd says that when You are in an Unlucky Phase of Life, You should (or Must) Bucha to Pra Rahu Asura Deva, to Appease Him and Get Him to Raise Your Line of Fate, and Release You from the Shadow of his Clutches. Kroo Ba Lerd came into possession of Two Pairs of Very Powerful 'Gala Ta Diaw' (1 eyed coconuts) from his Mentor Kroo Ba Nanta. One pair was bought for a large sum of money by a Singaporean Devotee, leaving only One Pair left. 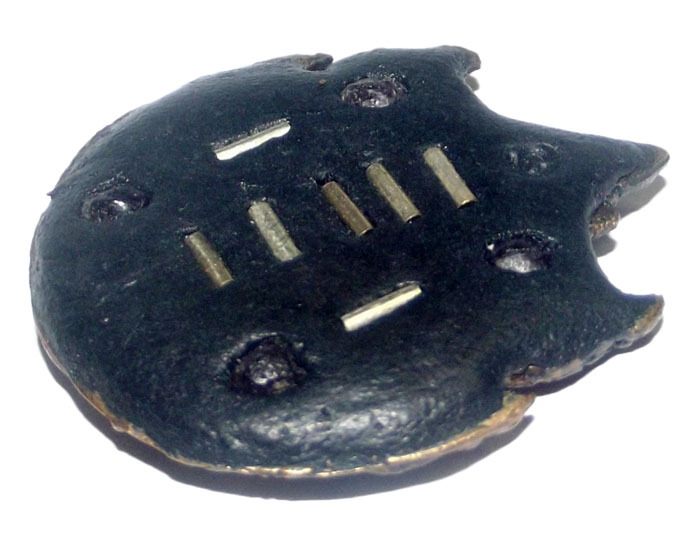 Whoever visited the Temple would ask for them, without fail every day, so Kroo Ba Lerd ended the problem and had them pounded up into magical Gala Ta Diaw powder. This powder was then mixed with Pong Yok Duang (powders to improve Horoscope). The powders were then pressed into eight bars of Muan Sarn, called 'Pong Gala Kroo'. This Sacred Powders Mixture is very Potent and Effective in Improving Fate and Removing Bad Luck, Improving the Conditions at Work, and the Economy of Your Household. So Kroo Ba Lerd saw it fit to use these Powders for the making of Pra Rahu Yok Duang Fate Improver Amulets. 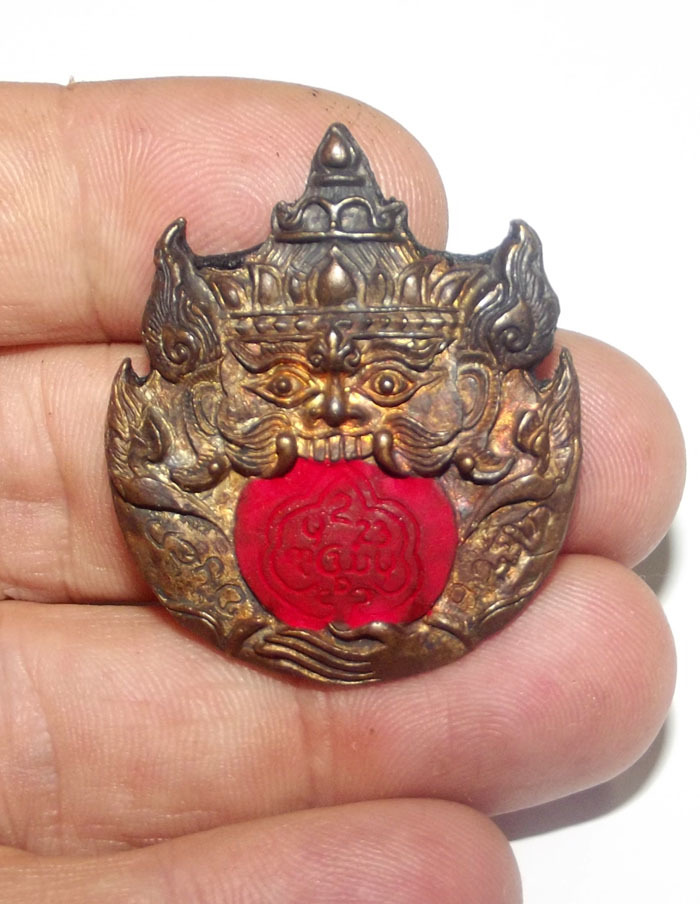 There were two different Versions made of the Pra Rahu Amulet; Nava Loha (9 Sacred Metals) front, with 7 Takrut in back face (7 Takrut for the 7 Kampir to bring Luck for each day of the week), with Pong Gala Kroo from Kroo Ba Nanta, and Ploi Sek (Blessed Gemstones, which bring Lucky Fortunes). The second 'Ongk Kroo' Masterpiece version was also made in the same way, from Nava Loha and Pong Gala Kroo ba Nanta, with the difference being that two more Takrut (Suryan - Jantra for the Sun and Moon, to raise Solar and Lunar Signs above the reach of all Dark Influences) are also inserted. 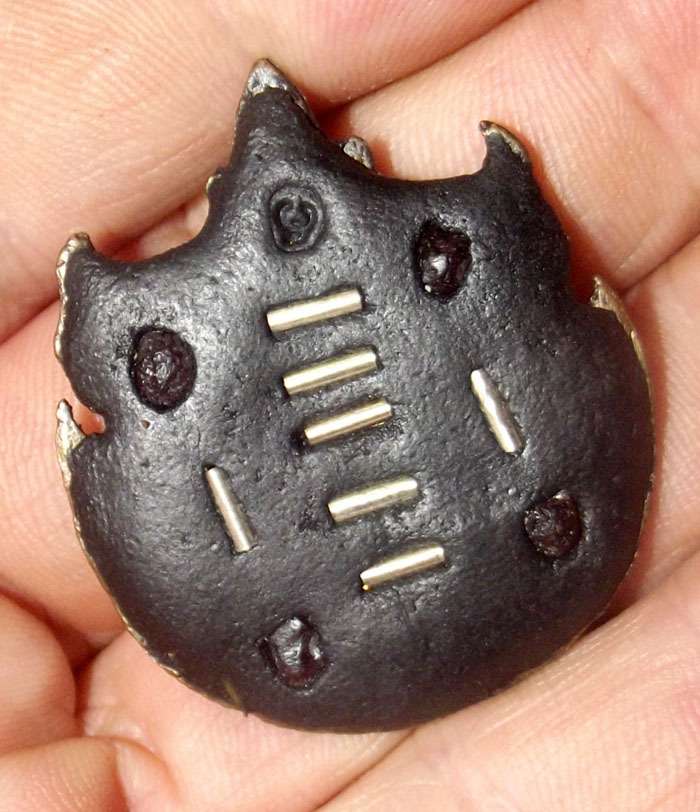 Nine Silver Foil Takrut Spells, and Four Blessed Gems are Inserted into the Sacred Powders, along with a code stamp 'Ma' in Aksorn Dhamma Lanna lettering.

Please read the info on the below link, to learn about how to Worship the Pra Rahu Asura Deva;

The Amulets were Released in 2555 BE, along with a range of other excellent fine quality Traditional Lanna Amulets. The Edition was made to raise funds to complete the Construction of a 'Hor Chan' (Monks Dining Area) at the Temple. Kroo Ba Lerd is not one of those Masters who bring out one to 4 editions of amulets a year, and in fact does not bring out regular editions like clockwork, rather only when seriously needed. This time, Kroo ba Lerd has seen the need for the building of a 'Hor Chan' (eating room) for the Monks, and has seen fit to allow the making and release of this extra special edition of Traditional Ancient method Amulets made using the Lanna Northern Wicha for which Kroo ba Lerd is so well known for. Kroo ba Lerd is very Popular in other South east Asian Countries, especially in Malaysia and in Singapore.

is Empowered for Speedy results, which is no wonder with Kroo Ba Lerd, as he is already known by Thai People for his ability to take a Yant even if it is a factory pressed one, and swipe his hand over the Yant, and it will become a Powerful Amulet already with just this action. What happens when Kroo Ba Lerd makes the Inscriptions himself and spends time Empowering them with Incantations, Jhanic Meditative, and Psychic Kasina skills. This is of course much more Powerful, and when we see a special amulet that is lovingly made such as this edition of Amulets is, We can comfortably assume, that Kroo Ba Lerd has given them a long period of empowerment. And that each amulet, has the personal touch, and personal blessing of the Master who made it.

The amulets were blessed on two occasions, once on the 6th May 2555 BE and then again on the 26th June 2555 BE in the Hor Dtrai (Tripitaka Room) of the Temple of Wat Tung Man Dtai. 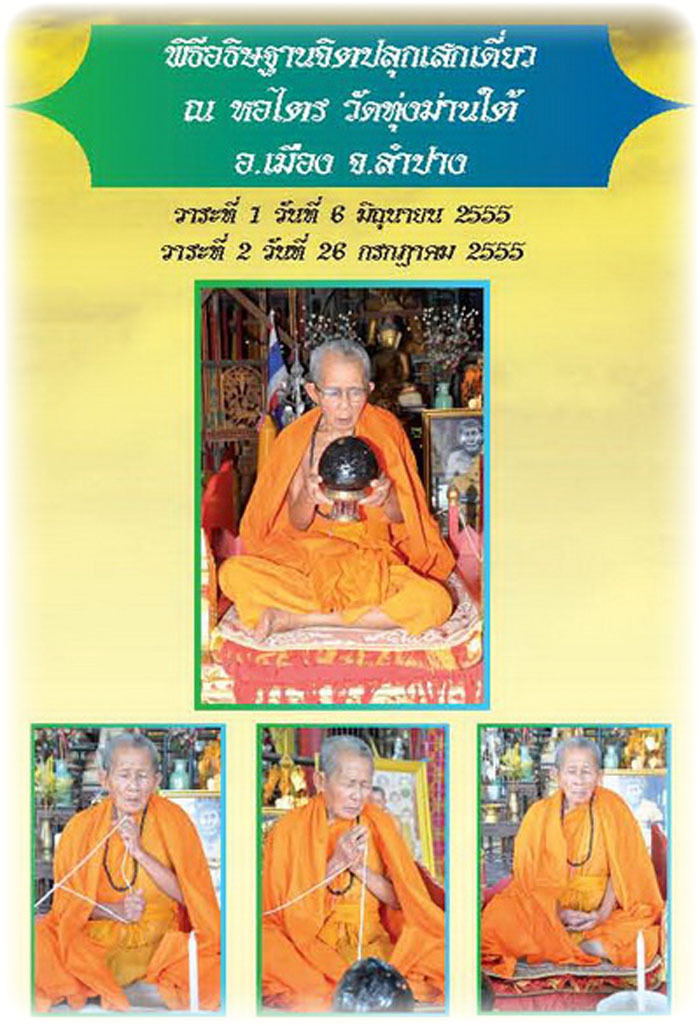 Some amulets recieve Mass Empowerment but do not pass each single amulet through the hand of the Master, rather recieve a batch blessing, but these amulets as can be seen, are hand made with personal blessings from Kroo Ba Lerd, and therefore of the Ancient Method of Empowerment (one by one, which is both Tiring and Results in a very Powerful Amulet). 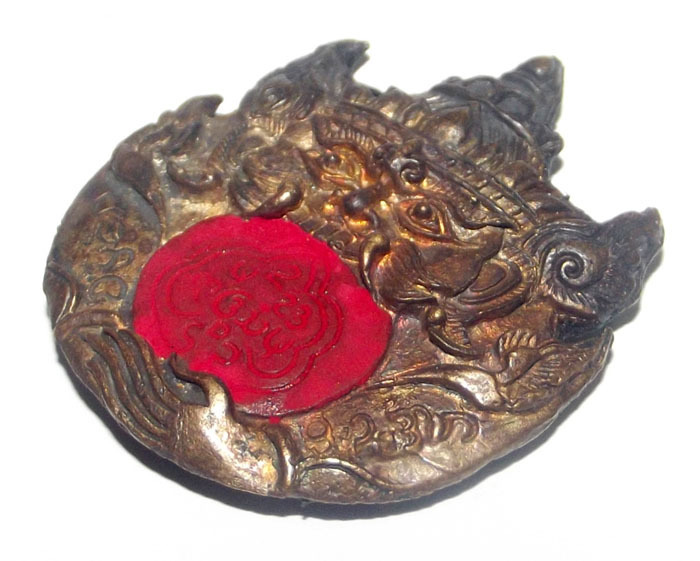 You can read about all the different amulets in this edition here;

* Immortal; The Buddha Dhamma teaches Us, that all things are Impermanent, and thus, there is no such thing as an Immortal**. When we consider the Inevitable end of the Galaxy, and Eventual Consummation of the Universe in its Completion and Final Dissolution, then even the Stars and Planets have an End in the Long Run, and thus, the word 'Immortal' is used in a limited sense, meaning 'for how we experience Time to be, Rahu lives for so long, that he is almost Immortal'. The legend of him being unable to be Killed is therefore more considered a Blessing and Magical Power, than a true Dhamma.

** Immortal (2); Although the previous paragraph explains that nothing is Ultimately Immortal, Immortality is still a Reachable Goal, through the attainment of the Realisations leading to the end of the Paticca Sammupphada (Wheel of dependent Origination) to come to Cessation. In such a case of Becoming Enlightened, Immortality is achieved in the Birthlessness and thus also deathlessness of Nibbana. Birthlessness results automatically in Deathlessness.