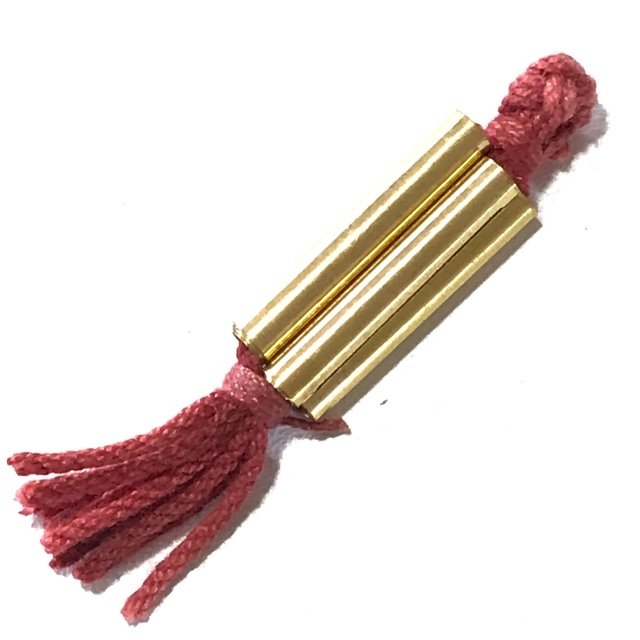 Presenting Pra Ajarn Gorp Chai's Second Edition of the The Takrut Jampa See Dton after popular demand. The Takrut Jampa See Dton is a Traditional Ancient Wicha of the Northern Thai Lanna Tradition, in the Lineage style of Wat Mae Ya temple, derived and inherited from the Great Kroo Ba Wang, who visited Wat Mae Ya to pass on this Wicha to Luang Phu Kroo Ba Ban (Wat Mae Ya), who subsequently passed the Wicha down through the lineage to Pra Ajarn Gorp Chai.

Preserved and continued through this lineage Temple by Pra Ajarn Gorp Chai, who is currently the most active Monk in the making of amulets at Wat Mae Ya Temple. The Takrut Jampa See Dton has powerful leanings towards Metta Mahaniyom and Kaa Khaay Magical Powers. 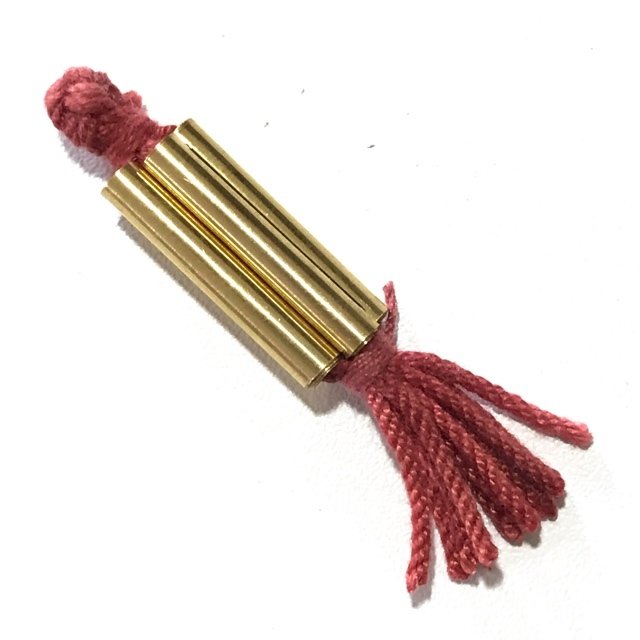 It is found in some of the most ancient Samut Khoi Black Parchment Magical Grimoires, dating back many centuries. This type of fourfold Takrut has been seen to be used with different kinds of Magical Influence, depending on the type of Yant used for inscription within the four scrolls.This particular version is specifically aimed at increasing the selling power of merchants and shopkeepers, and market traders, and travelling sapes persons, to being great prosperity. As has already been stated, this type of Takrut is most famously known and seen to be from the Great Kroo Ba Wang, of Wat Ban Den. 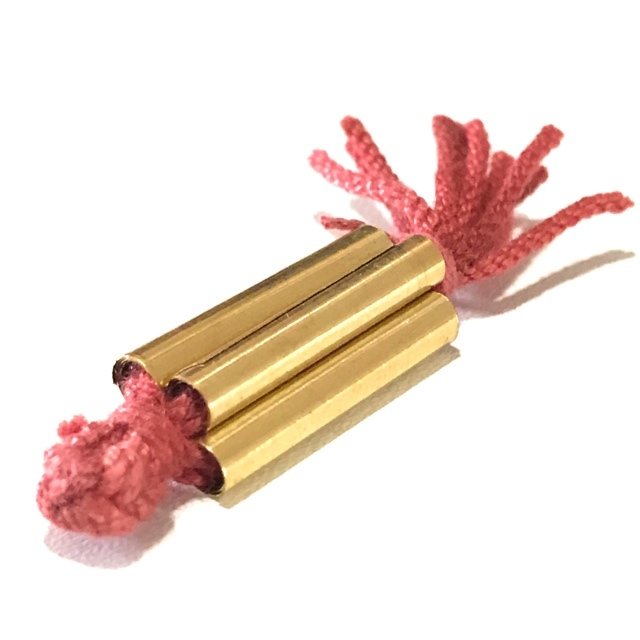 But many people may think that all fourfold Takrut of this type are one and the same Wicha, which would be a mistaken assumption. For indeed, there are many different Wicha in the Dtamra Lanna, which use four Takrut scrolls bound with red or white cord, such as the Takrut See Gum, Takrut Kwai See Hlak, Takrut Tat See, and the Takrut Bpathamang See Daan. 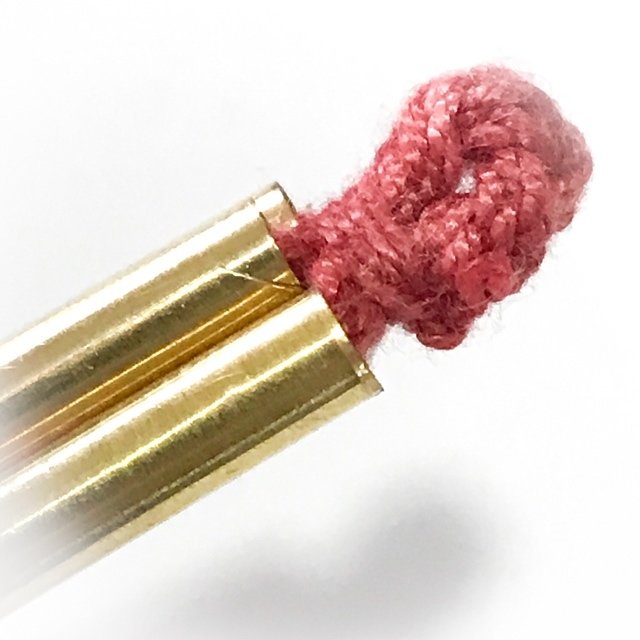 Kroo Ba Wang brought this Wicha to Wat Mae Ya, but this Takrut itself differs from that of Kroo Ba Wang in the Inscription methods. Pra Ajarn Gorp Chai explains that Kroo Ba Wang would usually use Kata Prayer inscriptions within the Takrut Foil scrolls. 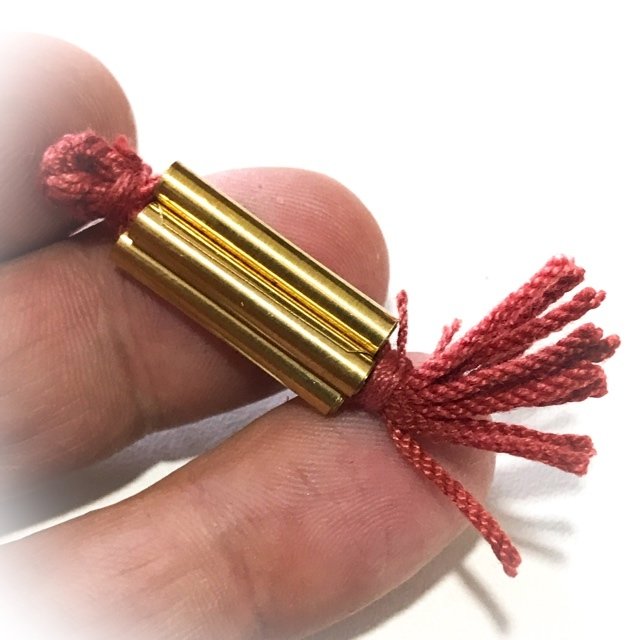 Whereas Pra Ajarn Gorp Chai himself has composed a series of Sacred Geometry designs (Yant), to inscribe within the same construction method of Kroo Ba Wang, namely with four scrolls, spellbound with red cord. 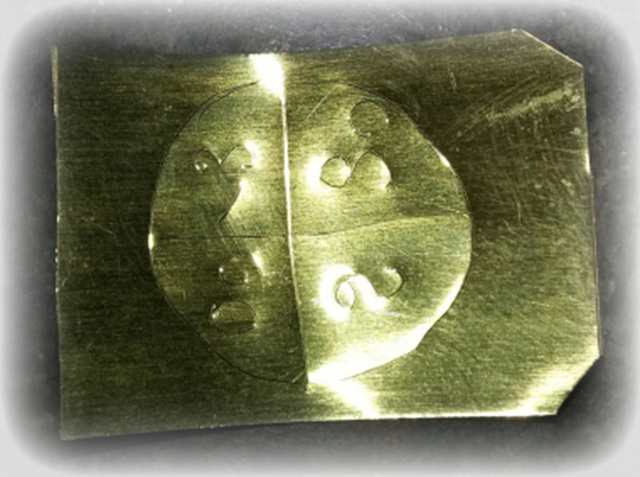 Above; This first Yant is for Puttakun Khaa Khaay, to increase the rate of sales and speed of selling in Business and Commerce. 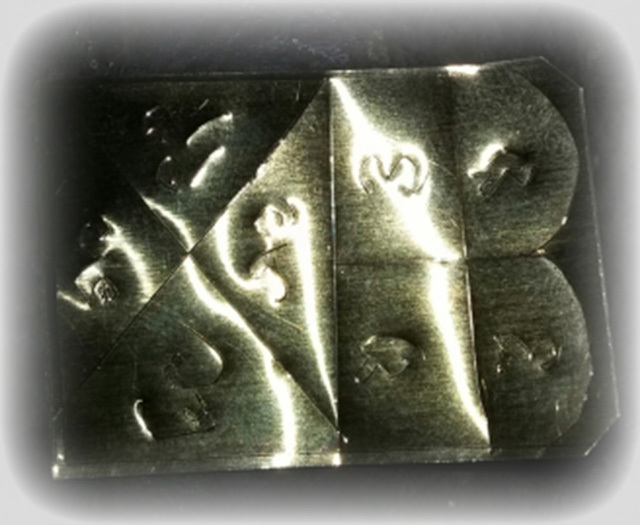 Above: This second Yant is for Metta Mahaniyom (Mercy Charm) which works to induce popularity and even attract the opposite sex, and Pongan Pay (Prevent Danger) 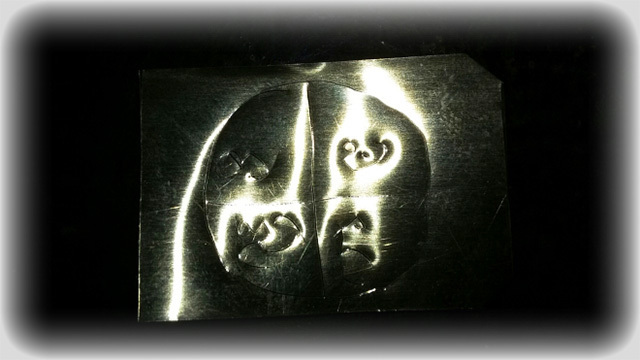 Above; This third Yantra is the Yant Hua Jai Manus (Human Heart Control Yantra) - to call people to come to you and attract their desires.

Above; This fourth Yantra is empowered with 'Idthibpiya' to induce Love and Fascination, and to enchant and seduce (including the opposite sex). 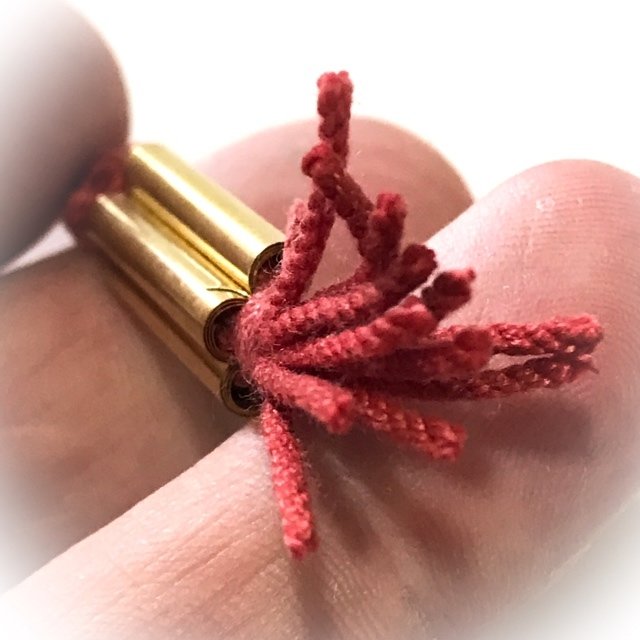 The Takrut Jampa See Dton, is a Historically and Culturally Important Amulet in this release from Pra Ajarn Gorp Chai, because it is a Takrut that adheres to the Meritorious reason of its making as a 'Serp San Dtamnan Yant Lanna' amulet.

The above Kata tutorial is available after purchase from the files download section of your account - hence we recommend you make an account with us when buying, so you can log in and download your files, and extras, as well as see previous purchase history 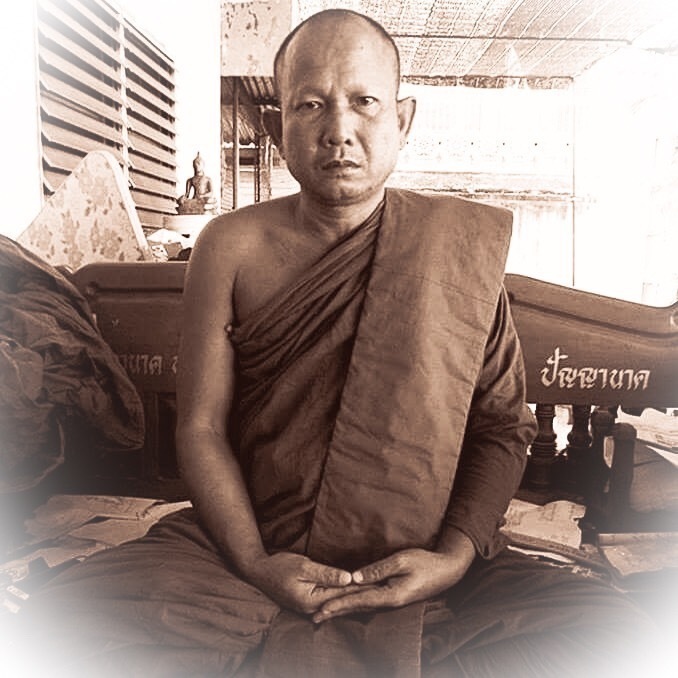 This is because the Takrut Jampa See Dton, is hardly seen these days, and very few Masters of the present day possess the Wicha, or even know of its existence.

Pra Ajarn Gorp Chai has thus not only brought is an authentic Ancient Sorcery Spell of Ancient Times, but has preserved the Wicha for many future Generations, by reviving true knowledge of its existence, uses and meanings, and methods of making, for the preservation of this truly inimitable spell of the Lanna Magical Arts. 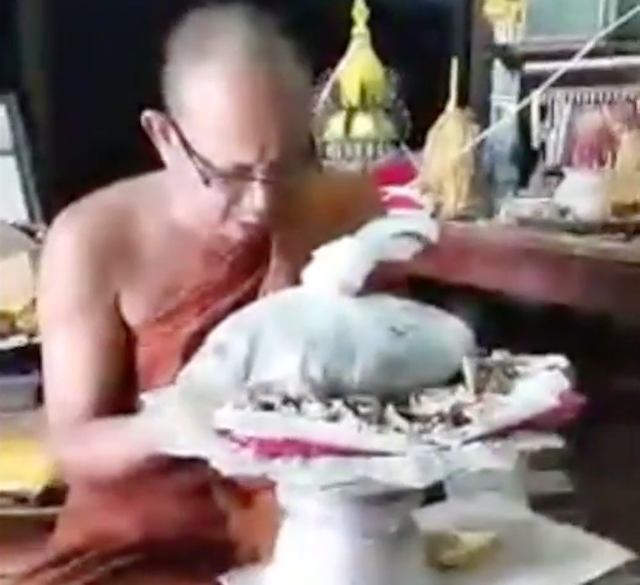 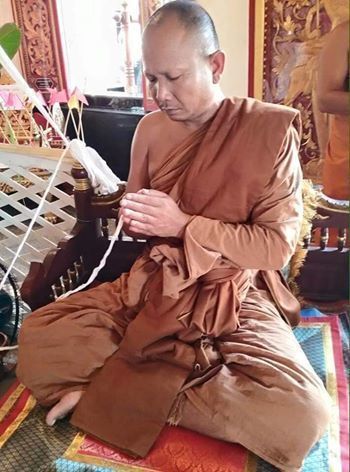 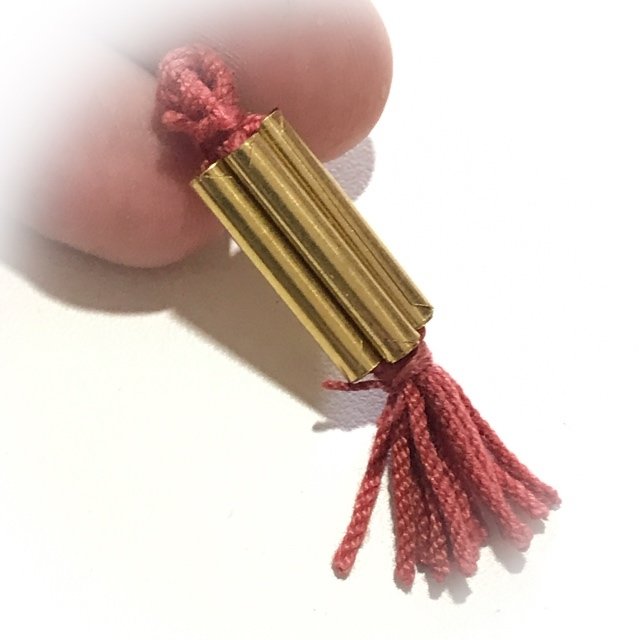 Pra Ajarn Gorp Chai is a lineage master of Wat Mae Ya, following in the tradition of his Kroo Ba Ajarn, Luang Phu Thin (Current Abbot) and the Great Luang Phu Kroo Ba Ban. Wat Mae Ya is the temple of the Late and Great Arya Sangha (said by his devotees to have attained. 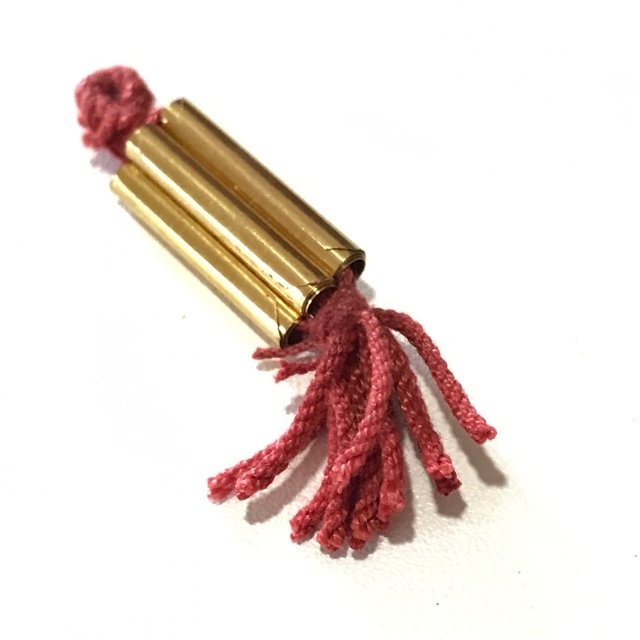 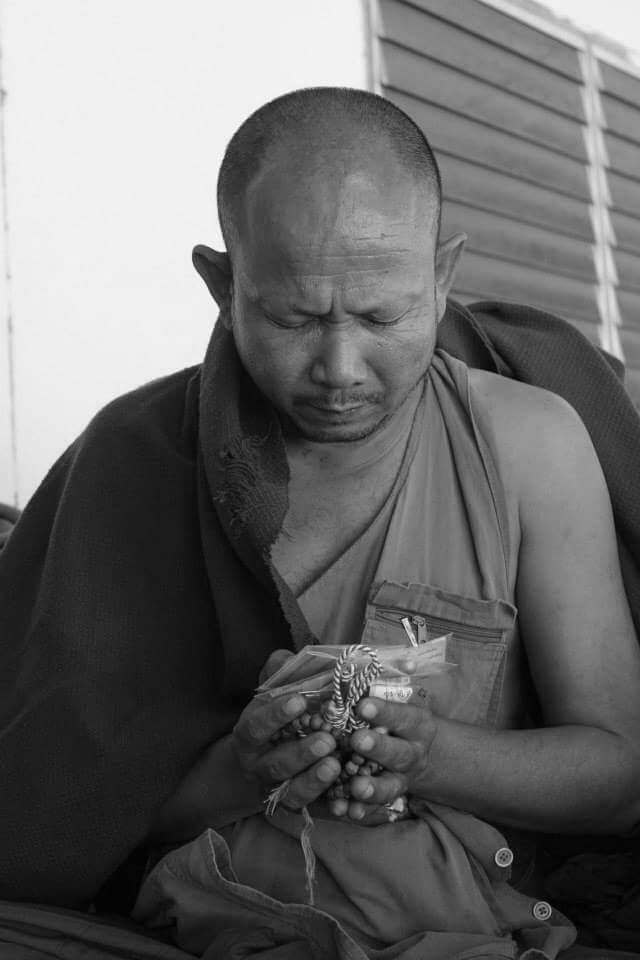 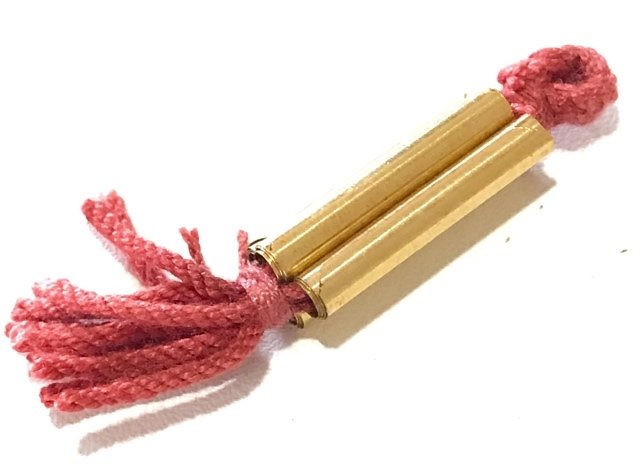 The amulets of Pra Ajarn Gorp Chai are amongst the most highly recommendable and authentically empowered with the inimitable personal touch of the master, which is becoming ever harder to find in modern times. it is our duty to discover and present you with the best amulets with authentic Wicha, and this is the reason why Pra Ajarn Gorp Chai has become one of our top recommended masters. 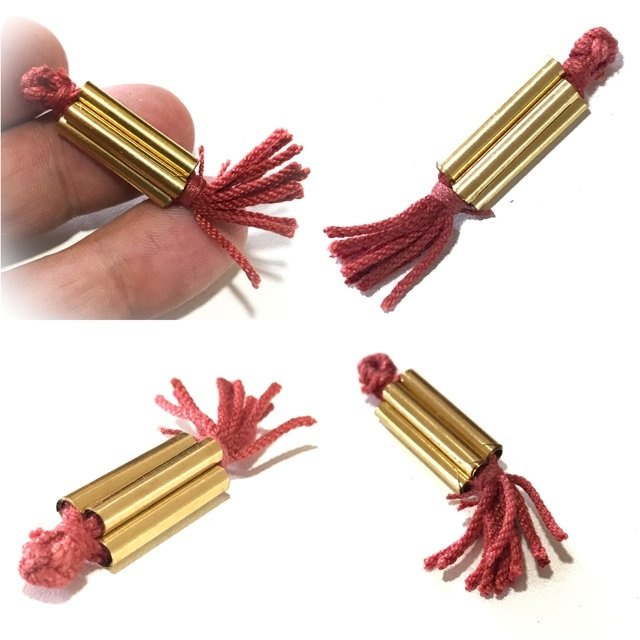