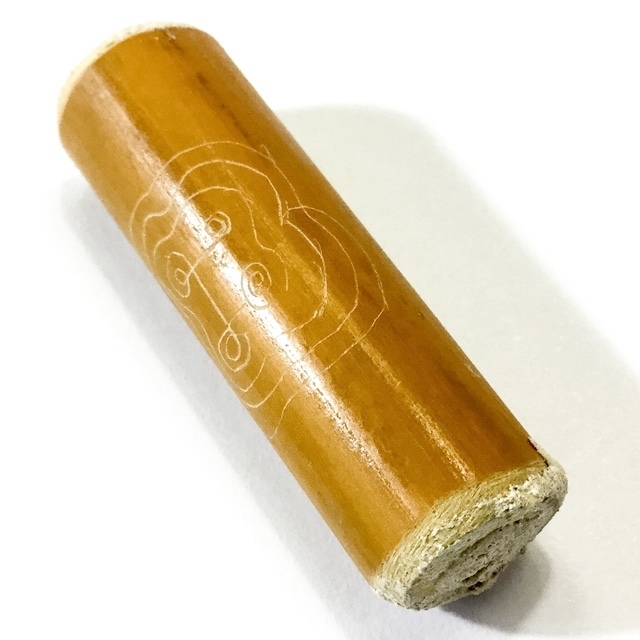 The Takrut Mai Ruak Bplaay Duan Ud Pong, is a sacred truncated magic yucca tree wood Takrut spell, with Muan Sarn Sacred Powder filled interior, and hand inscription of the Yant Na on the outer surface of the wood. Hand made according to the formulas of the Wicha by Lanna Master, Pra Ajarn Gorp Chai of Wat Mae Ya. 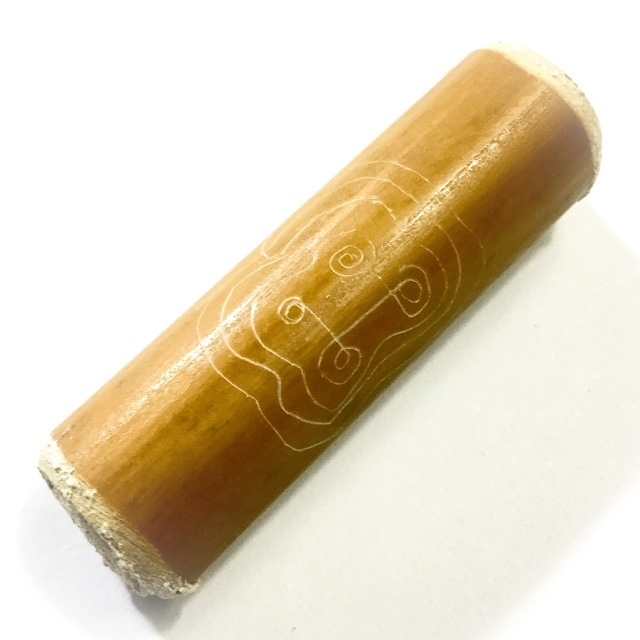 The Sacred Na inscription on the wood is an ancient spell from the pages of a centuries old grimoire text, which is found in the repository of magical grimoires curated by Pra Ajarn Gorp Chai, at the temple of Wat Mae Ya.

The Takrut Mai Ruak Bplaay Duan is yet another important amulet, which is not only a powerful Animist Occult Talisman, but is also an important part-player in the 'Serp Dtamnan' (Preservation of the Wicha through maintaining it in existence by producing and distributing it, and also the prevention of its eventual loss from human memory, through being forgotten). 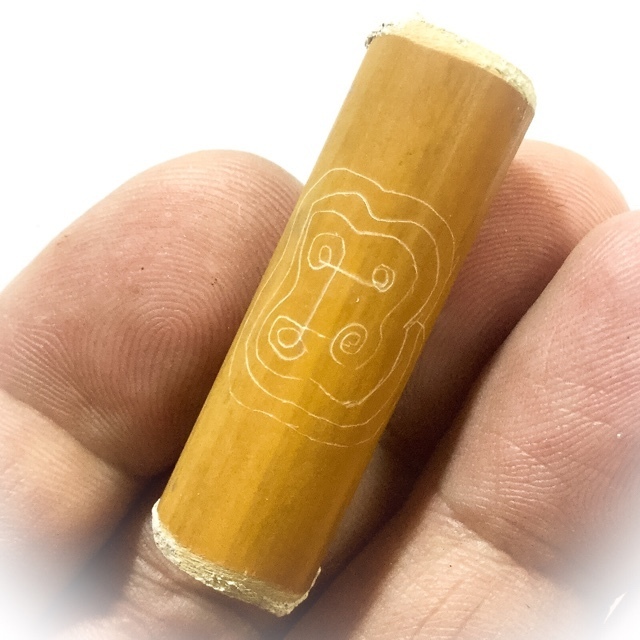 Pra Ajarn Gorp Chai, of Wat Mae Ya, has made this now extremely rare to encounter amulet for precisely the purpose of preserving the Wicha in the present day, and the future. The Dtamra Saiyasart Lanna (Books of Thai Lanna Sorcery) is a vast and ancient tradition, with immensely varied magical methods and artifacts, which come from a large number of Ethnic Sub-Cultures who have lived in the Lanna Region pervading across the borders of Thailand, Burma, Laos and Vietnam. 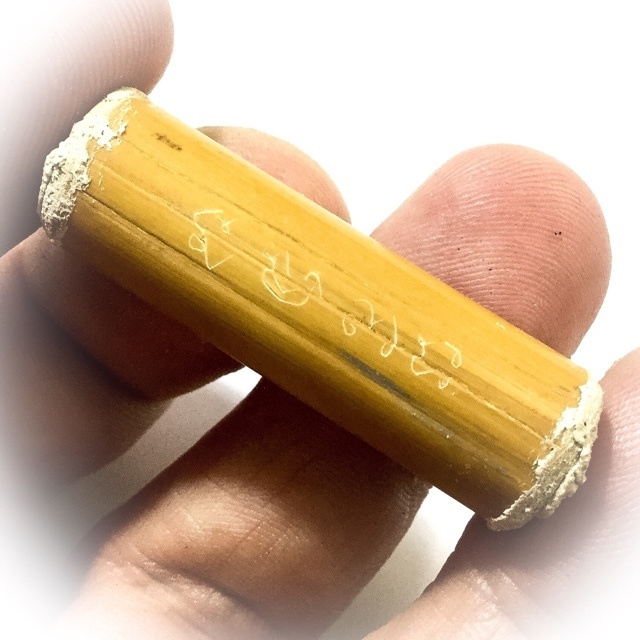 It is important to keep the ancient traditions alive, and to preserve their powerful ancient magic, which is as authentic as can be found anywhere in the world. To preserve these traditions, we are lucky to have meritorious practitioners such as Pra Ajarn Gorp Chai, who dedicates himself to creating a large compendium of these ancient spells, amulets and talismans, which he studies and masters, within the annals of the Kampira Grimoires of Sorcery at the temple of Wat Mae Ya, which date back centuries. 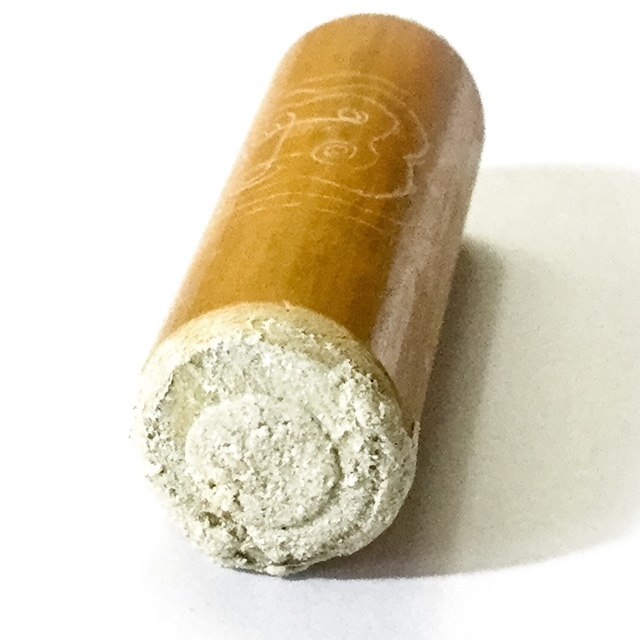 Above; Puttakun Powders within the hollow interior of the Takrut Mai Ruak

The Takrut Mai Ruak Bplaay Duan is hence a truly ancient form of Animist Earth Magic of the Lanna Tradition, relying on the powers of Nature, Elemental Forces, and the Empowerment through Incantations, Sorcery, and the use of Potion making in the form of the Muan Sarn Sacred Powders stuffed withini the hollow interior of the wooden shaft of the Takrut. 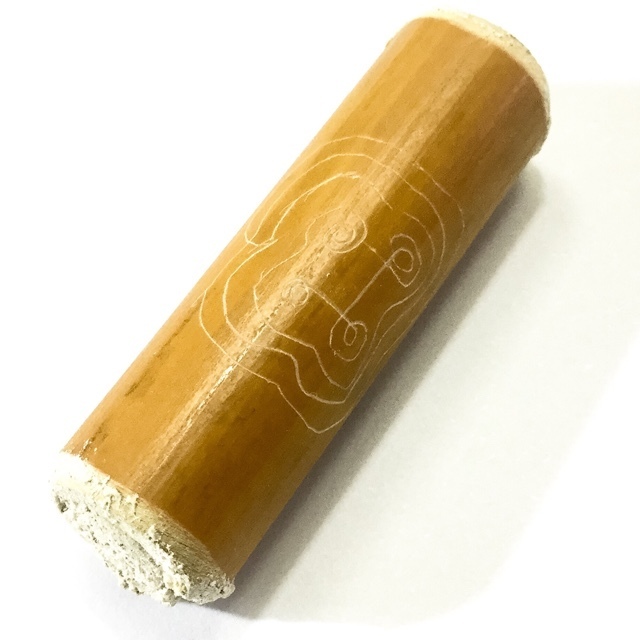 The Mai Ruak wood is considered to be 'Khong Ton Sit' which means that it has natural magic and power within it, even without any form of empowerment from a sorceror.

It is even harder to find a piece that is thick enough to make a Takrut out of. The Takrut has a Sacred 'Na Ud' spell inscribed on Gradat Sar (thin rice paper) and inserted within the hollow interior of the Mai Ruak Bplaay Duan. 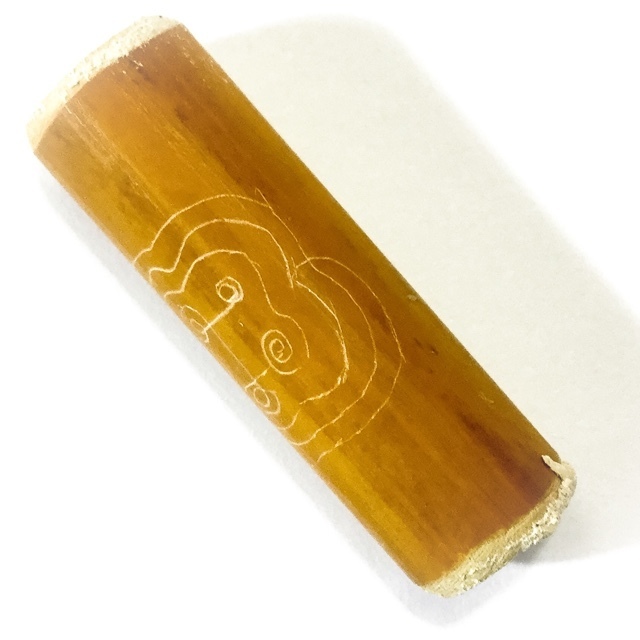 Then the Takrut was filled and sealed with the Spell within, using Muan Sarn Sacred Powders made from Pong Prai and Pong Puttakun. The exterior of the Takrut has been empowered through the inscription and invocation of the Tat See (4 Elements), and with the Sacred Yant 'Na Ud' once more on the exterior.

The Sacred Na Ud Yantra spell is an extremely ancient Yantra from the spell-repository of Wat Mae Ya, which comes from ancient times and is a very rare, spell to see these days, for it has almost become lost from the memory of most modern day Masters. Luckily, we have meritorious masters like Pra Ajarn Gorp Chai to work for the continuation and preservation of these ancient Wicha of the Lanna Tradition of Buddha Magic. 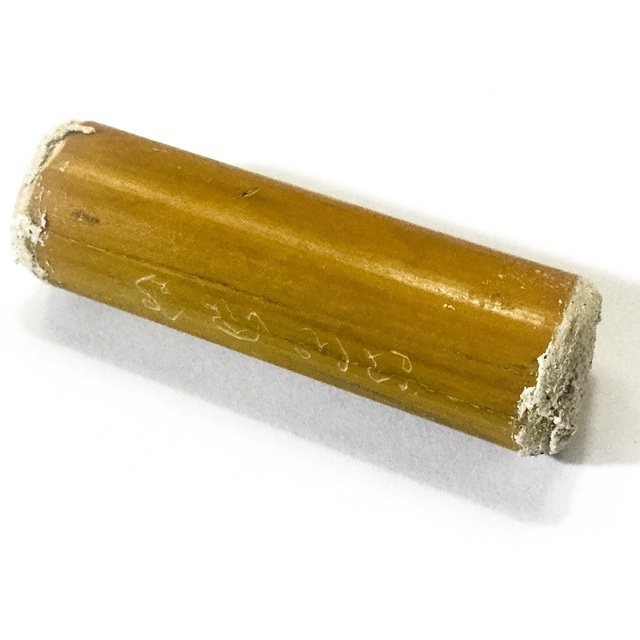 The Invocation and Summoning, Awakening and Turning of the Four Elements was performed during the empowerment, to Reanimate Living Magic within the Static Form, according to the Ancient Grimoires and Magical Formulas of this Wicha. 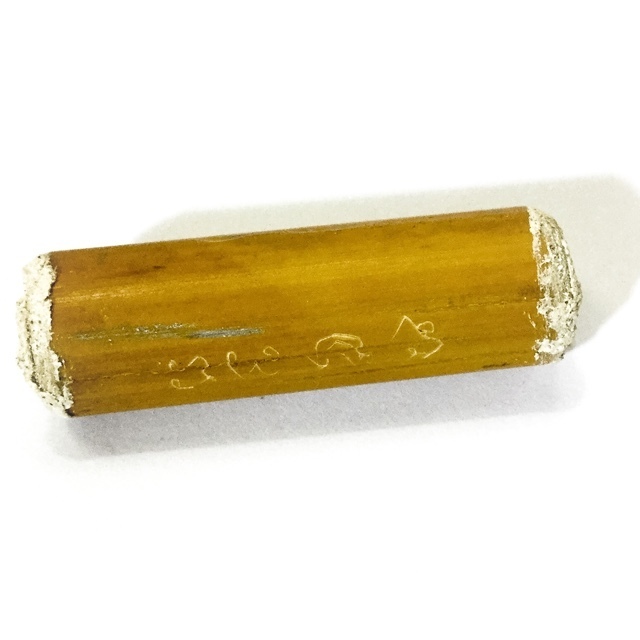 To invoke Maha Ud Gunstopper Power (to silence guns), you should use the following Kata Bhavana, to chant and focus on the goal of gunstopper power. The Sacred Yant Na Ud, is ruled over by the five elemental components of all Sacred Na spells, the Pintu, the Tanta, the Pēta, the Angku, and the Sira. Thes five magical elements within the form of all Sacred Na, are invoked in the Kata.

The Takrut must then be sealed with the thumb and held tightly as you continue to chant;

Then chant the following on top of the previous Kata;

Chant the whole formula 108 Times, to complete the spell. 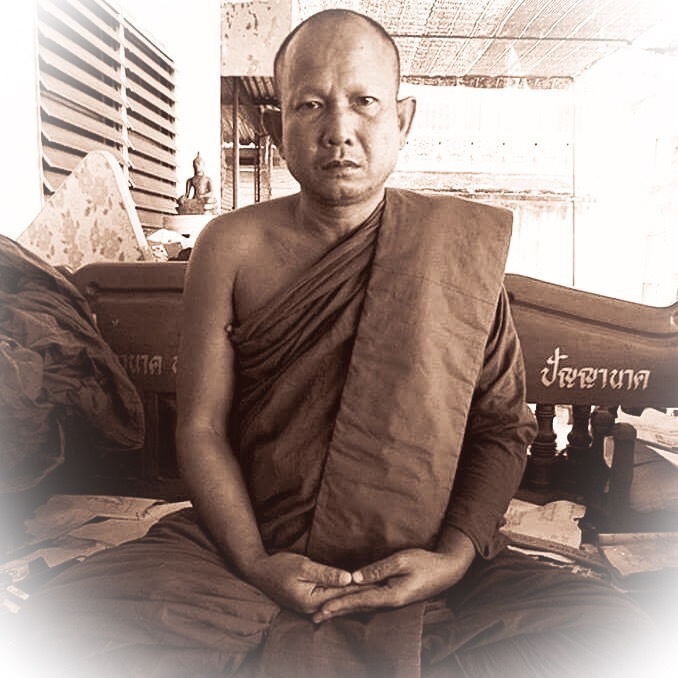 He has Mastered and is preserving the various Wicha, by making amulets using the formulas contained within these Grimoires. The many different kinds of Takrut and other amulets he is making, are very rare and many have been lost to common public knowledge in modern times, for which Pra Ajarn Gorp Chai is meritoriously reviving their existence through creating these, and his other limited series amulets. 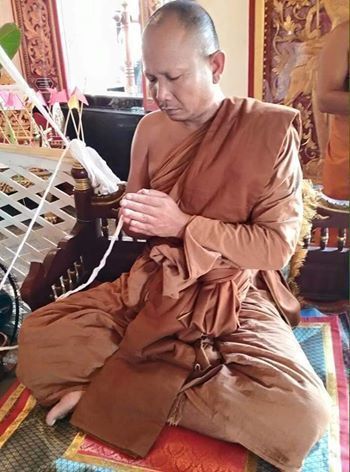 He also preserves their importance by not overproducing each type of amulet, preferring to make many varieties, but only very small limited numbers of each variety. He does not produce for major distributors, and only makes them for his devotees. 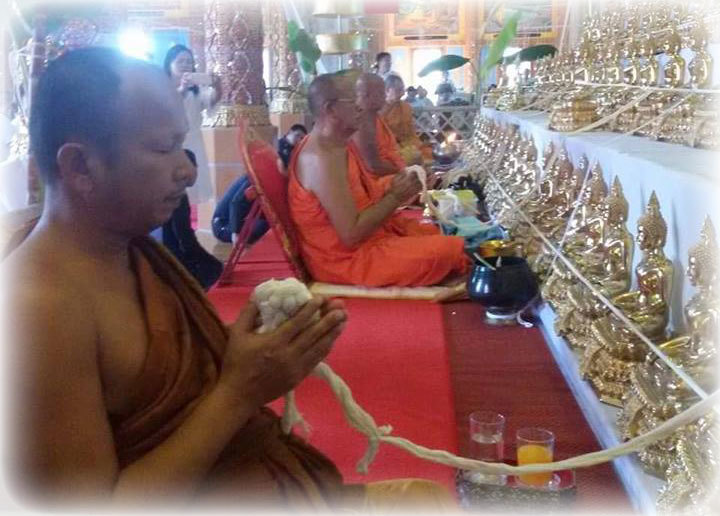 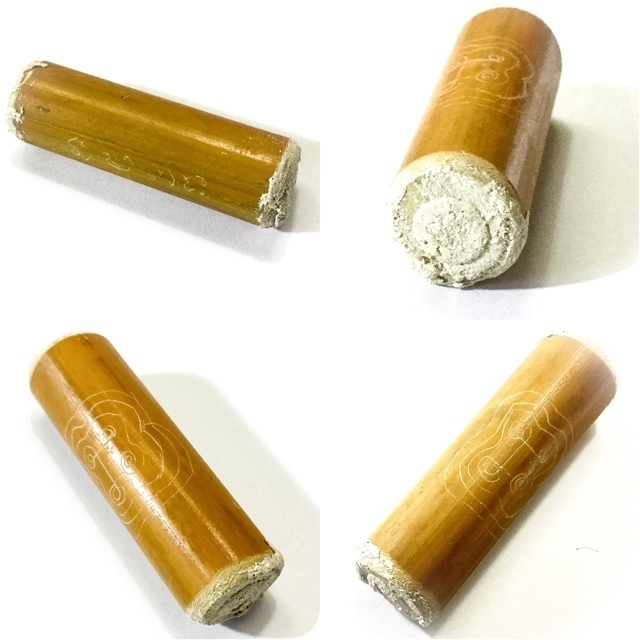