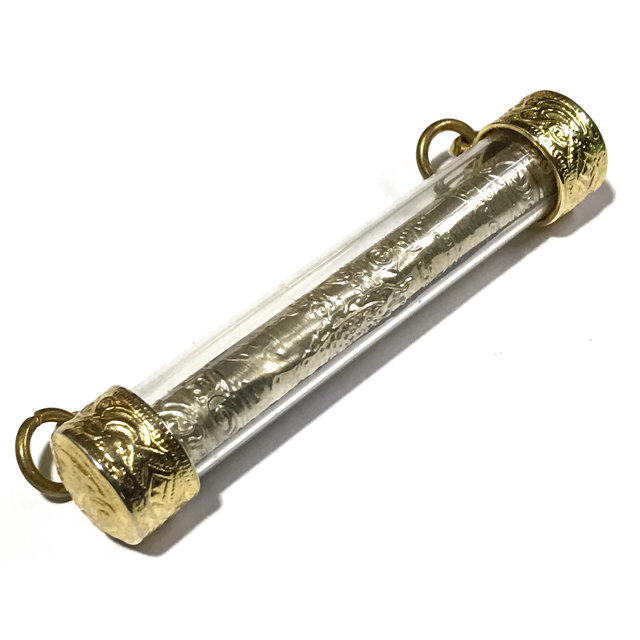 The Takrut Maha Amnaj Singh Plaeng (Narai Plaeng Roop), is an early edition extreme limited series amulet of extreme rarity, from the Great Kroo Ba Krissana Intawano of Asrom Weluwan in Nakorn Rachasima. The spell is composed of a hand Inscribed Yantra Spell on Solid Silver Foil, with the special spell inscriptions of Kroo Ba Krissana Intawano. Only 57 Takrut were made equal to Kroo Ba Krissana's age at the time of making (57 Years Old).

The Takrut foil bears the inimitable inscriptions of Sanskrit Spells in Devanaghiri which are composed into the design by Kroo Ba Krissana, who is of the few Thai Guru masters able to write in this Ancient Vedic Indian Script, instead of the Khmer Khom Agkhara. 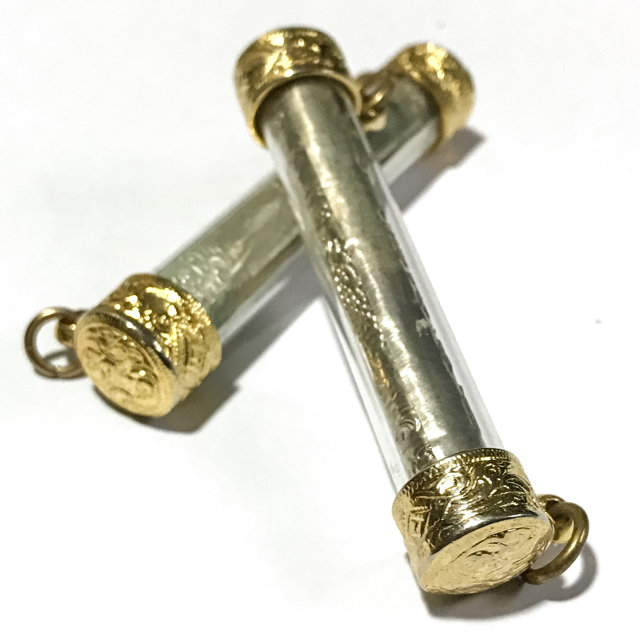 This early-days Takrut is encased in gold plated steel capped tubular casing with two pendant hoops for attachment to a neckchain or 'chueak kart Aew' waist cord. Nowadays, the amulets of Kroo Ba Krissana Intawano are known around the world both for their immense power and their exquisitely detailed artistic design, and their individuality, each amulet being different in its fine details. 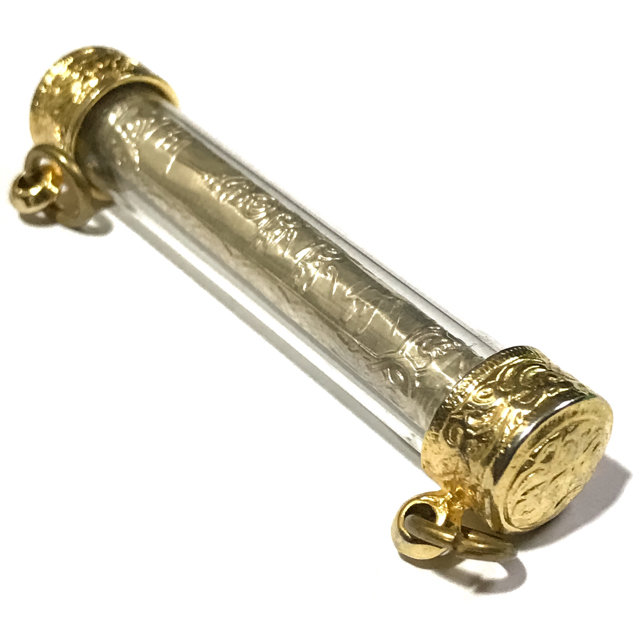 Since the year 2015-2016, Many different sponsors made a lot of different editions, which caused the price of those new mass made editions to reduce the value of the amulets made in much larger numbers than early editions.

One can hence say, that all pre 2555 BE can be considered the rarest and most highly valued, with increasing rarity as their numbers deplete and increasing numbers of devotees going into collectorship of the amulets of Kroo Ba Krissana Intawano. 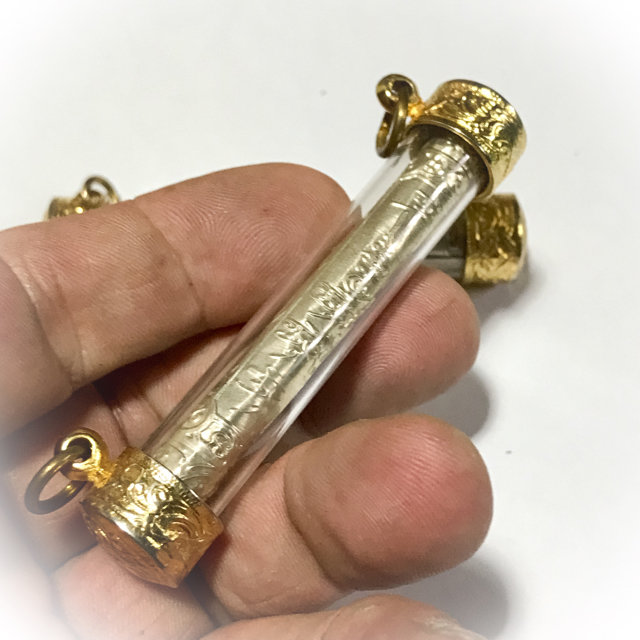 The rarest and most highly sought after of all are of course the early era editions, especially the first 3 editions. The post 2555 BE editions provide availability for the ever increasing numbers of foreign devotees to receive Kru Ba's blessings and wear one of his beautifully designed originally painted amulets, as the early editions like these, become ever more impossible to encounter available anywhere. 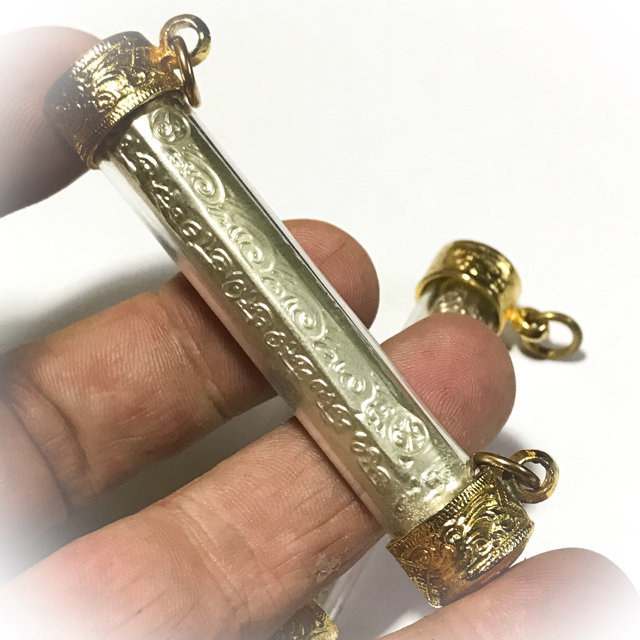 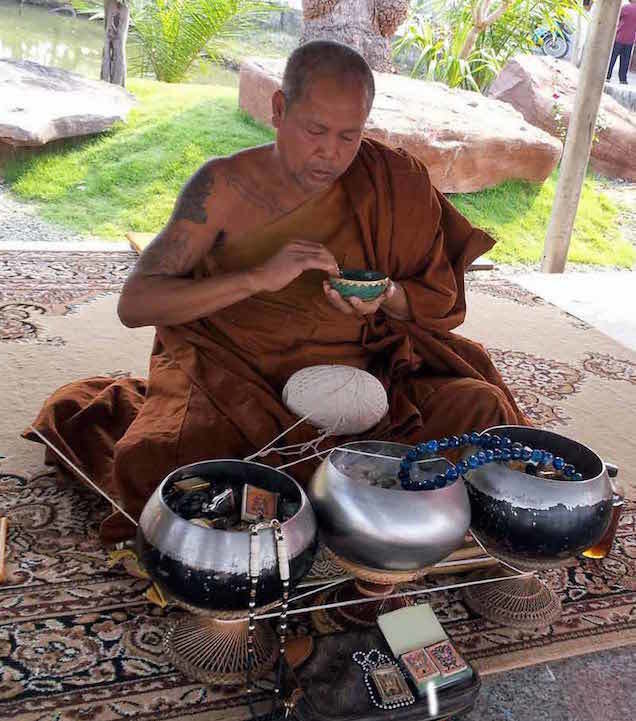 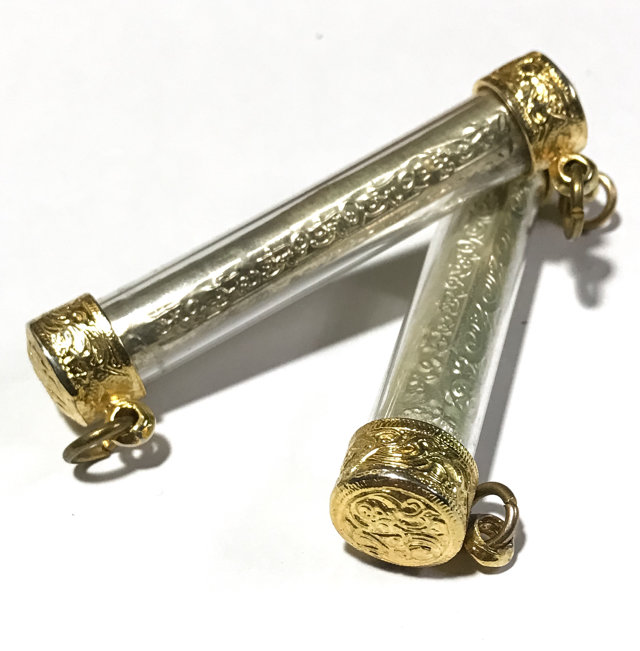 Kroo Ba Krissana Intawano is also an accomplished Sak Yant Master, who is less known for his Sacred tattoos, than for his amulets, which is in truth only so, because of the ultra high profile and international attention that his world famous amulets have recieved, The amulets of Kroo Ba Krissana Intawano are not only seen to be powerful amuloets for Metta Maha Lap Kaa Khaaydisguising many his other accomplishments, such as the many expansions and construction of edifices for the temple he has brought into being, his Sak Yant Thai Temple Tattoos, His Teachings, and his many forms of blessings, such a Holy Water Spraying. 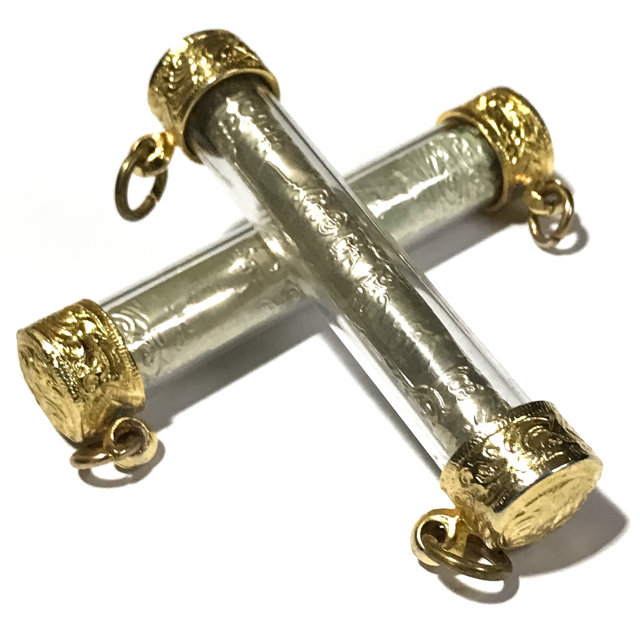 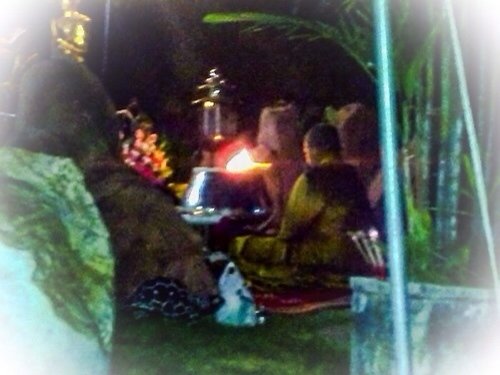 To make and empower amulets, Kroo Ba Krissana uses a very secret and mysterious wicha named 'Montr Teerayaan'. He studied this wicha under his kroo Ba Ajarn Phu Ruesi Bangbod in Laos. Besides the unique wicha Montr Teerayan, Kroo Ba Krissana studied a number of many other wicha in Cambodia. It took him about twenty years of intensive study and practice to fully master the teachings of the various great masters he stayed with during his time in Cambodia.

The Wicha within the Takrut contains the Invocation of the Taep Norasingh Deity, which was one of the 10 Avatars (Transformations) of Vishnu. The Takrut is Empowered with the Ancient Vedic Sanskrit Incantations to summon the God Vishnu in the emanation of the Taep Norasingh. The Taep Norasingh is the 4th Avatar (return to Earth) of the God Vishnu. In the Hindu Vedic Tradition, Taep Norasingh is called Narasimha. Narasimha is the half-man/half-lion, from the Satya Yuga. The Rakshasa (Yaksa Demon) Hiranyakashipu, the elder brother of Hirantayaks (Hiranyaksha), was granted a powerful boon from Brahma, not allowing him to be killed by man or animal, inside or out, day or night, on earth or the stars, with a weapon either living or inanimate. Hiranyakashipu then went on the rampage forcing the humans and Devas to worship him and pay dues, and even bullied them to forbid them to worship Vishnu.

Below Hirantayaks, the elder brother of Hiranyakshipu, appears in a different Vedic tale, and is also Subdued by Lord Vishnu, in the Transformation Avatar of the Vahara Boar

Vishnu descended as an anthropomorphic incarnation, with the body of a man and head and claws of a lion. He then disembowels the rakshasa at the courtyard threshold of his house, at dusk, with his claws, while he lay on his thighs. 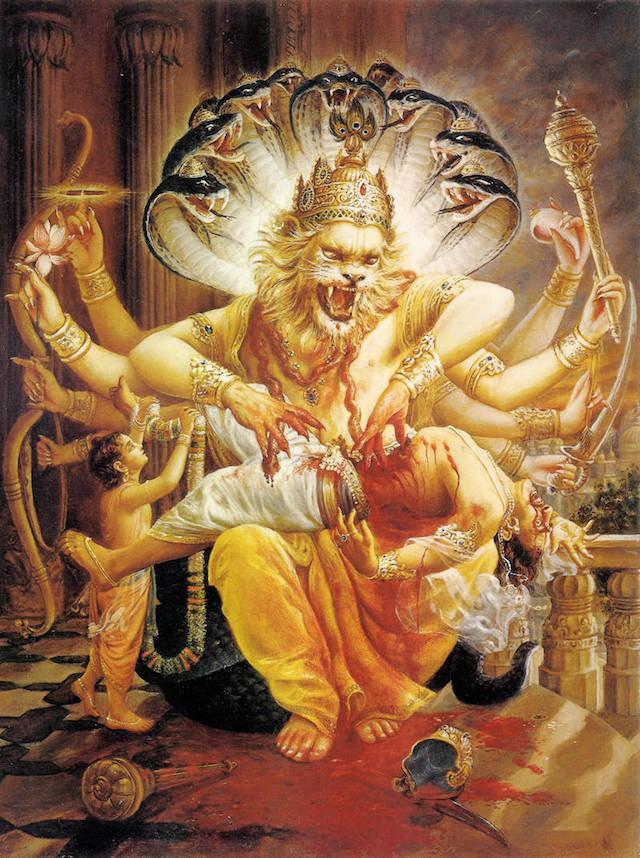 Due to the nature of Narasiṃha's form (divine anger), it is essential that worship be given with a very high level of attention compared to other deities. In many temples only lifelong celibates (Brahmācārya) will be able to have the chance to serve as priests to perform the daily puja. Forms where Narasiṃha appears sitting in a yogic posture, or with the goddess Lakṣmī are the exception to this rule, as Narasiṃha is taken as being more relaxed in both of these instances compared to his form when first emerging from the pillar to protect Prahlāda.

Lord Nṛsiṁha is here and also there. Wherever I go Lord Narasiṁha is there. He is in the heart and is outside as well. I surrender to Lord Narasiṁha, the origin of all things and the supreme refuge. 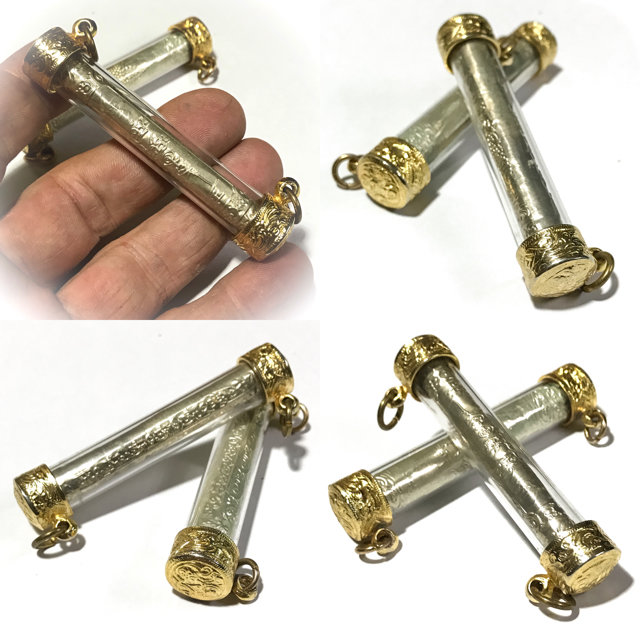