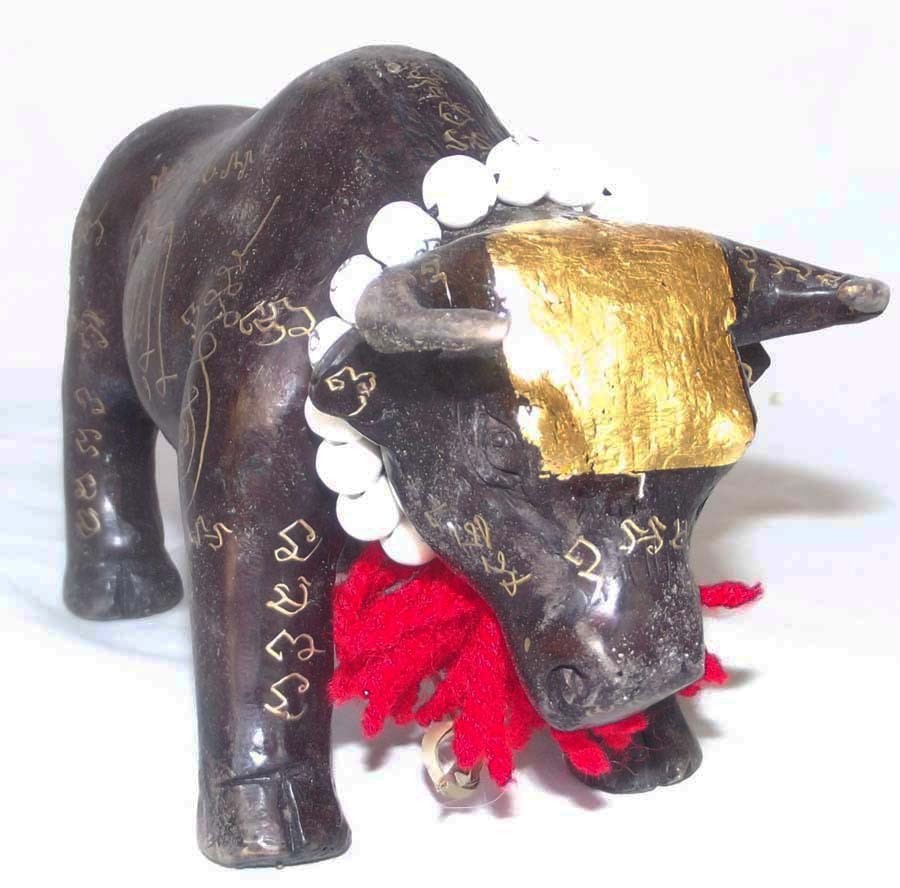 Wua Tanu Bucha statue from Luang Por Jerd comes as a special and highly expected edition of the most exquisite fine Masterpiece Amulets and Bucha statues that Luang Por has ever made. The Wua Tanu is a Powerful Guardian and Bringer of Sustenance, as well as a very Aggressive protector against Black Magic Ill Wishers, and Thieves. The statue measures 4.5 Inches Wide at the horns, (3 Inches Legspan), and is the Pim B model of two Models in this Size. The temple states this is a 3 Inch Bucha, which we find confusing seeing as the span between the horns is 4.5 Inches, incmparison to the space between the front hooves which is 3 Inches. The widest part of the statue is however, 4 Inches.

This 'Pim A' Wua Tanu Bucha statue, is Endowed with Three Golden Takrut spells inserted in Muan Sarn powders and Krang Putsa Resin Paste of the belly. 'Prakam Graduk Kwai' (Buffalo Horn Rosary), is tied around the neck. The Forehead of the Wua Tanu has a Gold Leaf final Blessing. Instilled with powerful Anti Black Magic and Protective spells to prevent thieves, demons, sorcery and curses from entering the household or vicinity around them. 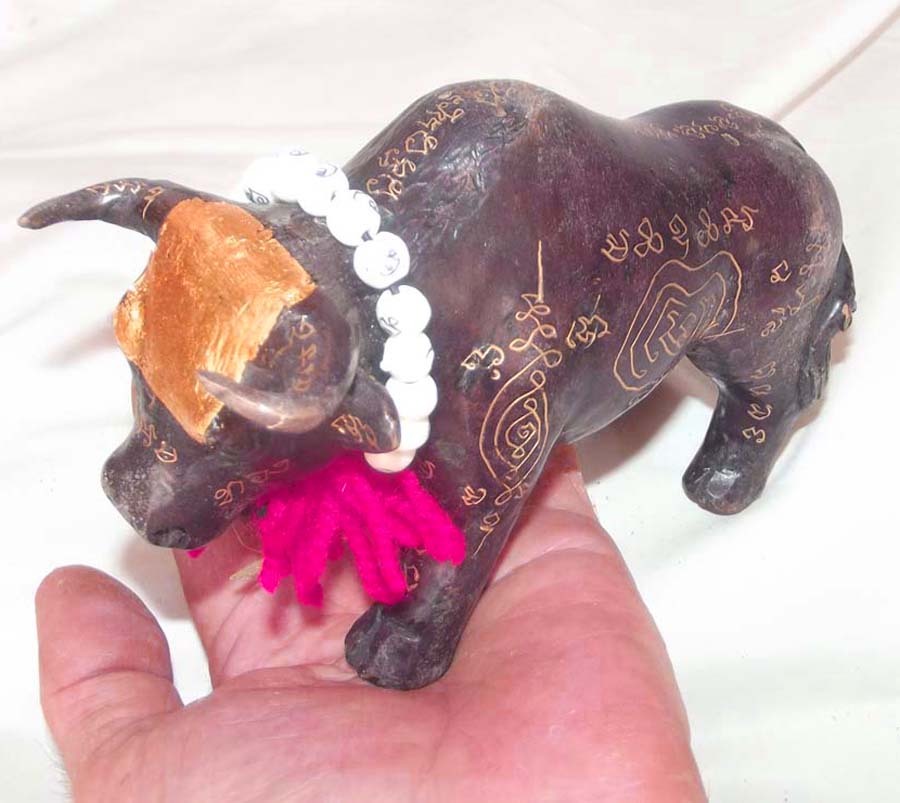 These Pim A Ongk Kroo Masterpiece Versions of the Wua Tanu have a hand inscribed Prayer Rosary made from Bone around their necks, and Gold Leaf Blessing on the Forehead. A powerful protector against Black Magic and House Invadors, as well as a strong attractor of wealth and treasures 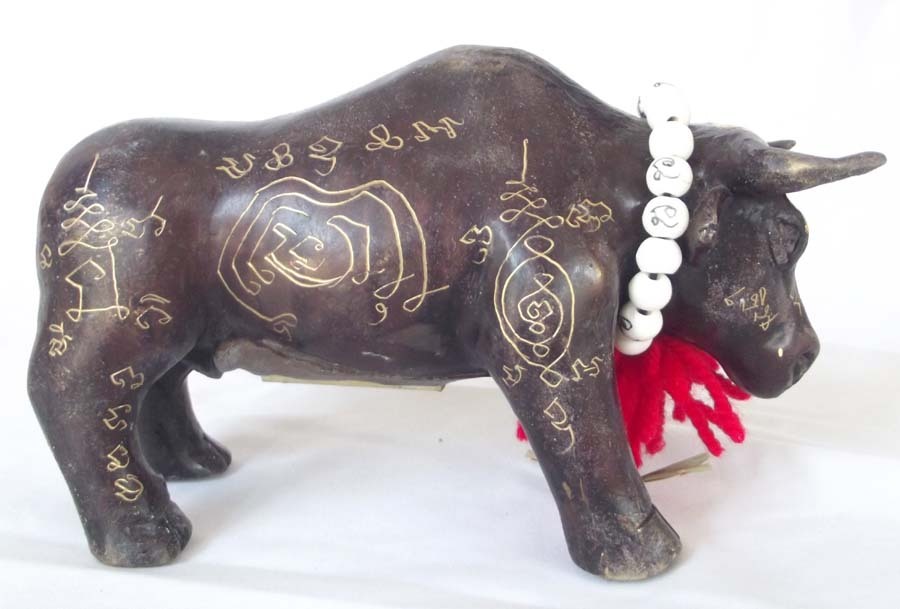 Each type and size has an Ongk Kroo version and a Standard version, in each of the two sizes. The Ongk Kroo masterpiece Versions in both 3 Inch and 5 Inch sizes (of both Wua Tanu and Kwai Tanu), have 3 Takrut (3K) inserted. Whereas the Standard Versions have 1 Takrut and 'Phaa Saam See' (Tricolored ribbons), instead of the rosary with hand inscription.

The span between the hooves measures 3 Inches wide, with the Horn Span being 4.5 Inches. 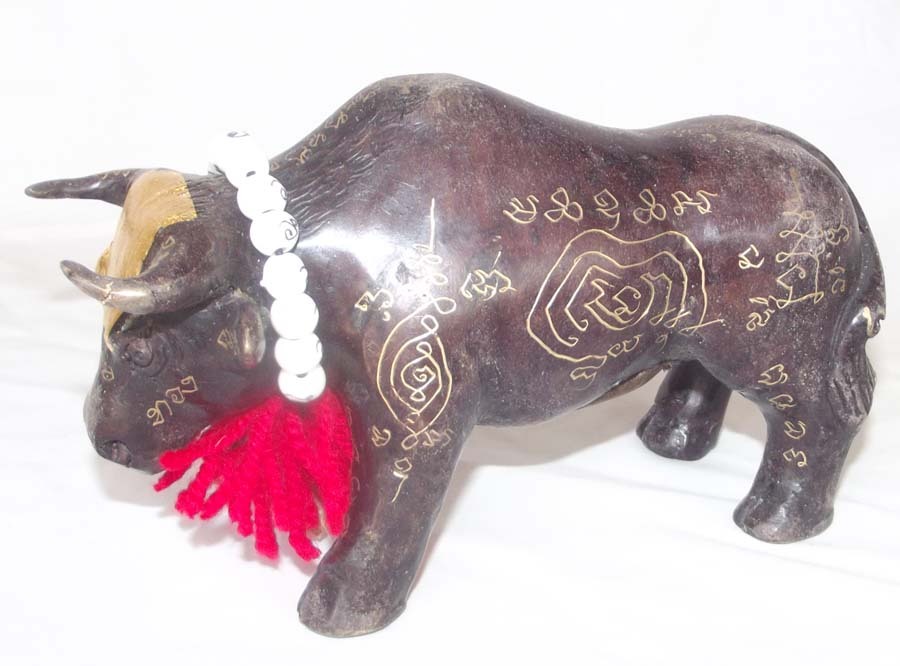 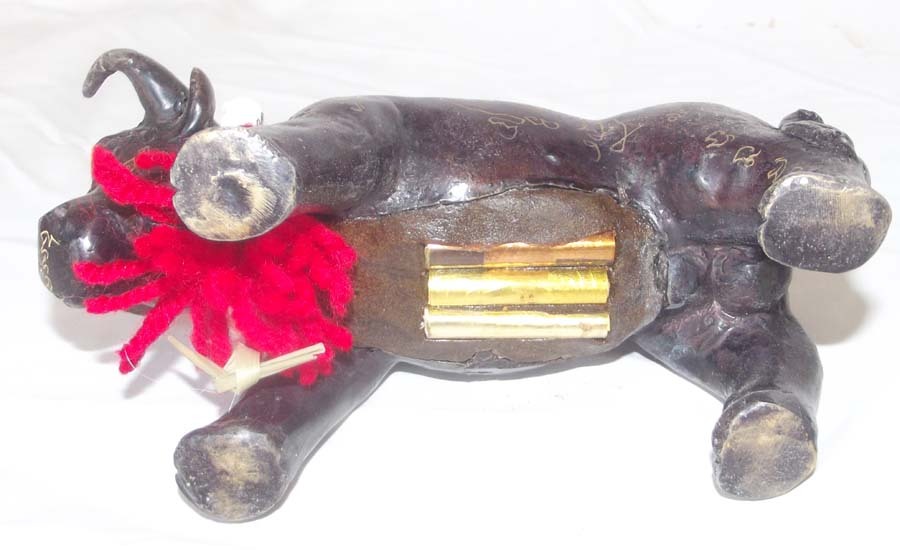 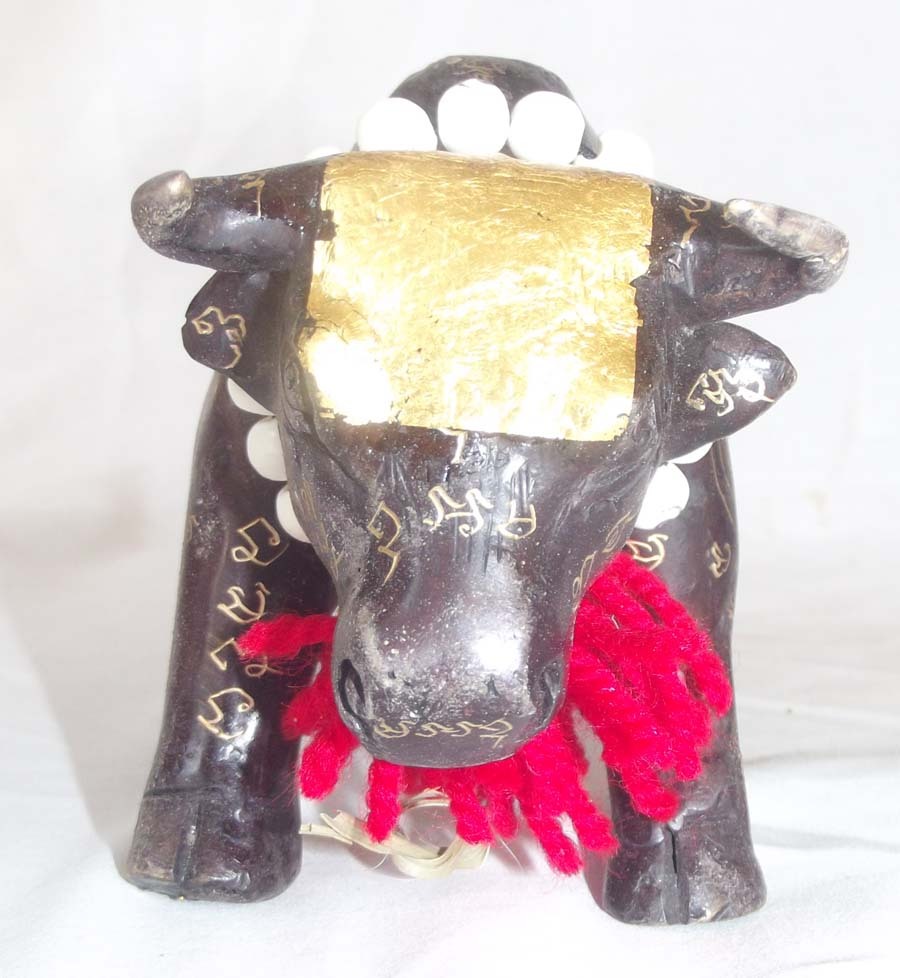 Luang Por Jerd has applied the Powerful and Authentic Wicha of his Mentor, Luang Por Noi of Wat Sri Sa Tong, to empower and bless this edition of amulets and Bucha statues which we find to be of the Highest Quality and has had Authentic Empowerment. 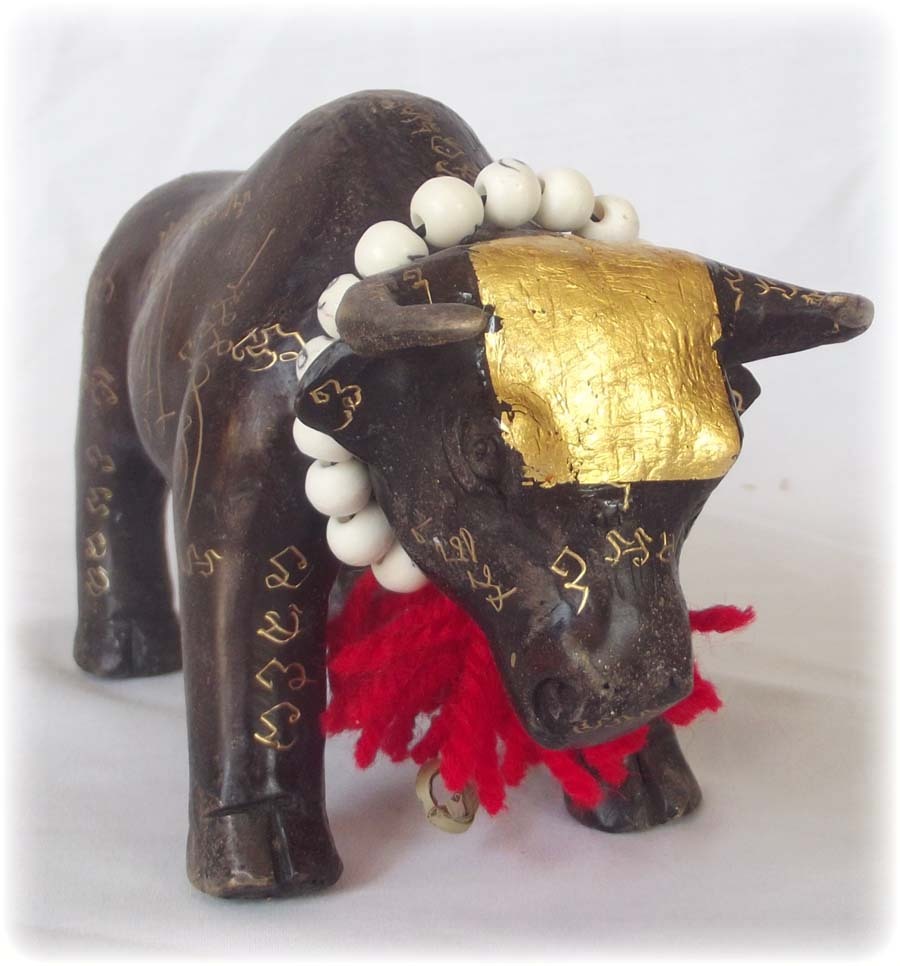 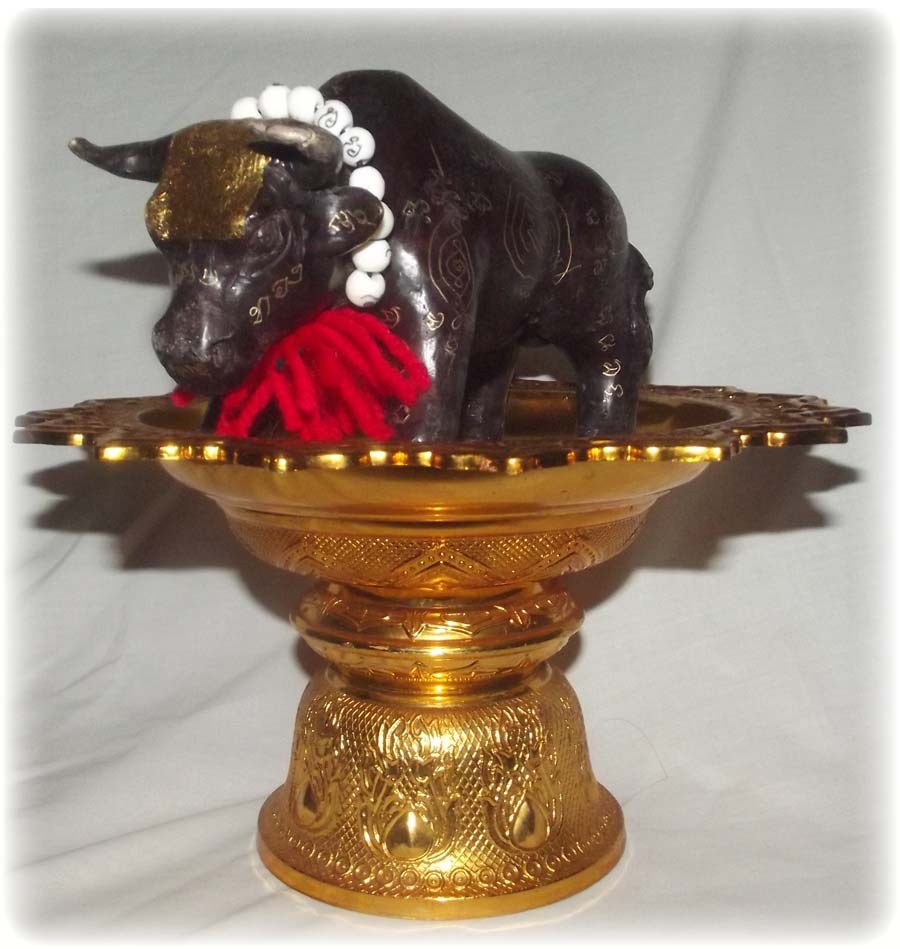 Above is an example of the Pan Kroo, which can be golden or silver, and is available as an added option when ordering. Use the selection tickboxes to add a Pan Kroo tray if you wish, and we will send you the Bucha statue with its own tray for placement.