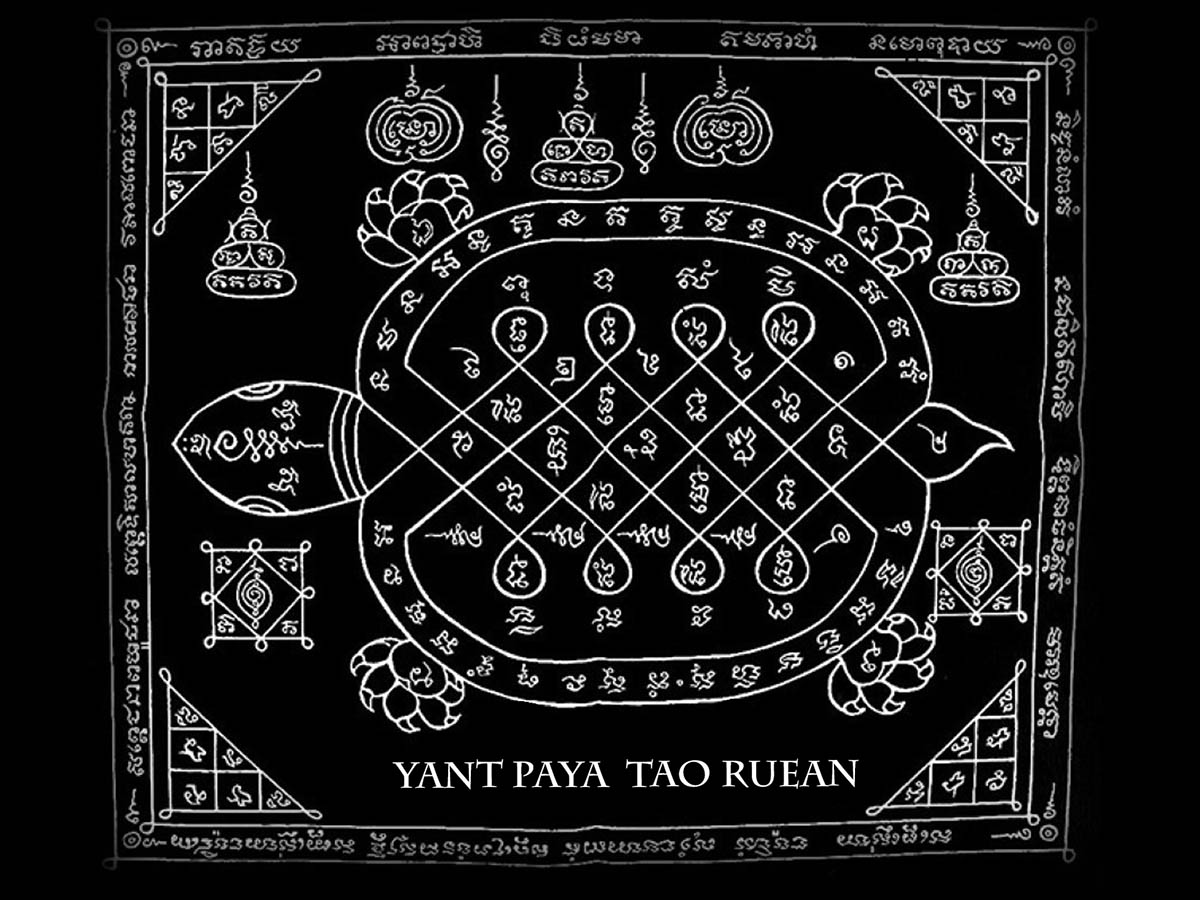 The Paya Tao Ruean Turtle, is a very popular and sacred image in Thailand, which exists within local legends, and in Thai literature, magical occultism, sacred geometry, and Thai Buddhist Cosmogony.

The Tao Ruean turtle grew so large over the years, as to be as big as the size of a house. One day some sailors were shipwrecked on his island, and began to starve. They tried to eat the Areca nuts, which are of course inedible, and then when one of them died, they trussed the dead man up, and roasted him, to eat his flesh for survival.

But this did not feed them for long, and they began to starve again. As time passed and they got desperate, and it began to seem as if they were going to begin killing each other, and become cannibals. 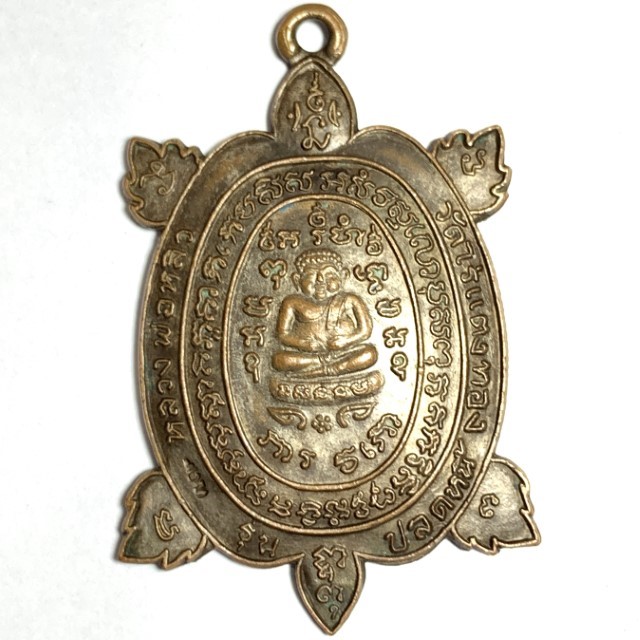 The Paya Tao Ruean turtle, looked down from the mountain, and was filled with mercy. He thought, ‘I do not have anything to give these poor humans to eat, except for my own body.  May i donate my large body, and its meat, for these humans to survive, and may i attain Nibbana one day for this deed’.

When the people got safely back to port and came home, they began to fashion turtles from clay or metal or carved from wood and place as an object of reverence in their homes, to pay respect and as a memorial of the Paya Tao Ruean who saved their lives, and to remind them to practice compassion, and to keep them protected from Danger, and bring them Long Life. 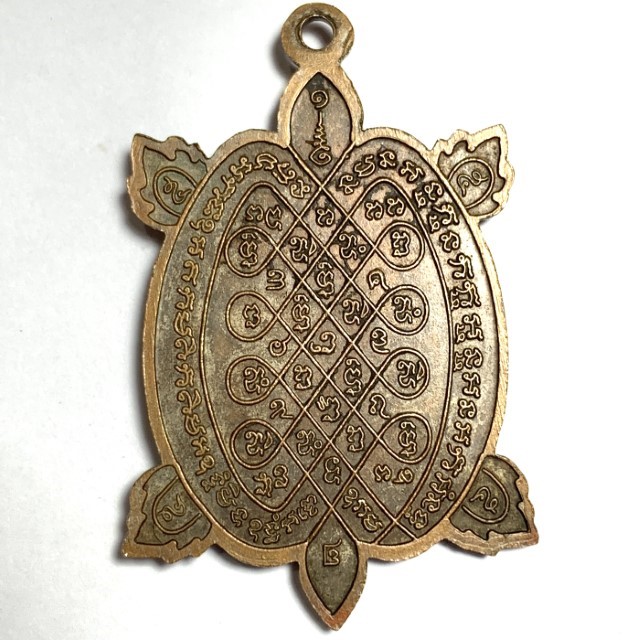 The turtle then threw itself off the cliff, and fell bouncing down hitting the walls of the cliff, breaking its shell open, to land dead at the foot of the mountain on the beach in front of the sailors. The sailors then celebrated and paid respects to the great Paya Tao Ruean Turtle for his Mercy and Self Sacrifice, and survived until they were rescued by a passing ship.

The turtle is also a very meaningful Spiritual Symbol in many other Cultures of the World, such as the American Indian Belief system; Many Eastern North American aboriginal peoples tell how Sky Woman, Atanaesic, fell from heaven to land on the back of Turtle.

The Buddha used a sea turtle to illustrate the precious rarity of opportunity afforded by our human birth. The turtle example appears in the scripture called in Pali, the Chiggala Sutta that is classified as LVI.48 of the Samyutta Nikaya. It is a metaphor known in English as The Hole:
“Monks, suppose that this great earth were totally covered with water, and a man were to toss a yoke with a single hole there. A wind from the east would push it west, a wind from the west would push it east. A wind from the north would push it south, a wind from the south would push it north. And suppose a blind turtle were there. It would come to the surface once every one hundred years. Now what do you think – Would that blind turtle, coming to the surface once every one hundred years, stick his neck into the yoke with a single hole?”

“It would be a sheer coincidence, Lord, that the blind turtle, coming to the surface once every one hundred years, would stick his neck into the yoke with a single hole.”

“Now, this human state has been obtained, a Tathagata, worthy and rightly self-awakened, has arisen in the world. A doctrine and discipline expounded by a Tathagata appears in the world”.

One of the best known Jatakas (Buddhist Fables of previous Incarnations of the Buddha Sakyamuni), is sometimes called The Turtle and the Geese. The story tells about a turtle who travels with a flock of geese, and does so by holding a wooden stick in his mouth, while two of the birds hold  each end. When the turtle was unable to restrain himself from responding to a some young children who  shouted out in surprise upon seeing the unusual sight, the turtle naturally fell to the ground and was killed.

The moral of the Jataka was of course: “Disaster can come from opening your mouth at the wrong time.” 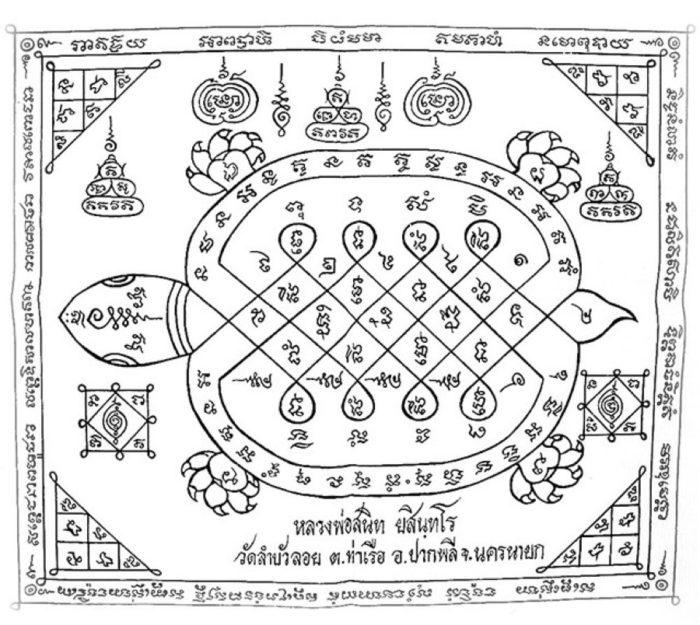 The Yant Paya Tao Ruean spell has so many different applications; you can inscribe it on a cake of face powder and use to powder your face with; People will feel pleased to see you, and you will be protected from people becoming unfriendly to you; even if your Boss at work is extremely angry with you, his anger will disappear immediately.

Use it to powder your face before entering a Court Case and our opponent will be silenced. Inscribe the name of the Person desired to be affected by the yant in the place where the letter “Pu” is (The centre square) write the person’s name first, then the letter Pu on top of it. If you wish to use this Yant to help you in an Exhibition/competition, inscribe the Yant on a sugar palm leaf along with the name of the targeted person.

Place the Yant under running water (such as a stream, fountain etc).Our opponent will be useless against us. Another application is as a love charm; Inscribe the Yant on a sugar palm leaf along with the name of targeted person. Use the leaf to roll a cigarette with, blow the smoke towards the person we wish to lure, and they will fall in love with us.

Then take your foot and tap the dog’s mouth 3 times, whilst saying; “A” (3 times).
If it is a very serious matter to be dealt with; inscribe the Yant on paper along with the name of the other person involved. Roll the Yant up and stuff it in the mouth of a “Pla Duk” (Catfish), take the hair of a corpse who died a violent death or drowning and use it to sew up the mouth of the catfish (use exactly three stitches to sew it up).

Chant the “A” Syllable three times whilst sewing.

Pierce the catfish with a skewer and roast it on a grill fire whilst chanting the following;
Pla Nan Pen Yang Rai, Khor Hai Man Pen Yang Nan Terd.

Once the fish is roasted, give it to a dog to eat.You can give the dog one fish a day for three days and your problem will disappear. If your employer is angry with you; Inscribe the Yant on candle wrapping (thin paper) along with your employer’s name.

Soak it in perfumed oil and light the candle in the same manner as one does when praying to Buddha. The person targeted will be unable to be angry with us. If someone is making accusations (legal for example), take the yant on paper and a “Khong” seashell (a kind of clam). Close the lid of the clam again, and for Paya Dtao Luean/Ruean. Our accuser will be powerless to speak out against us.

If you are competing in an exhibition or test or competition of some kind, inscribe Yant Paya Dtao Ruean on a sugar palm leaf.

Inscribe the name of our competitor in the middle and the letter Pu in Khom on top of it. Place the Yant under running water (a brook, stream or waterfall for example). As the water flows offer the Leaf, our competitor will become weak and powerless. Can also be inscribed on a Banana leaf, rolled up into a cigarette using “Yaa Sen” (a thai tobacco alternative). Light the cigarette and blow the smoke towards the person we wish to charm; they will fall in love with us increasingly.

Please take heed, that if you use a love charm on somebody and it works, there is a very strict rule you have to follow; Namely, that if the spell works, you must never break up with him/her!  For indeed, if you make them love you, they will be unable to live without you. Throwing that person away may lead to them killing themselves, or at least undergoing pain and sadness, more than the normal level that humans can usually withstand!  So please be very considerate towards your newly gained lover if you use this kind of spell. abuse of a love spell on a person will bring you extremely Bad Karma.

Use the paper to wrap a candle with and light it:- Chant the kata until the candle goes out, take the ash residue from the candle and mix it together with some cooked rice (using your hand) – make 3 cakes out of it.

Water-divers like Otter, Beaver and Muskrat tried to bring up mud to form the earth. Traditions vary as to which one was successful. Sky Woman dies there, giving birth to her twins who embody the principles of Good and Evil.

The Astrological meanings within the Turtle Shell, and amulets, tattoos or cloth sacred geometry designs containing the Yant Paya Tao Ruean Spell, are also immensely powerful. It is well known, that the number of lunar months are embodied in the number of plates of a turtle shell: “13 moons on Turtle’s back.” Turtle amulets have of course the special magical quality of generating long life. All achievements will come steadily, if perhaps not rapidly but surely and secure growth will be certain.